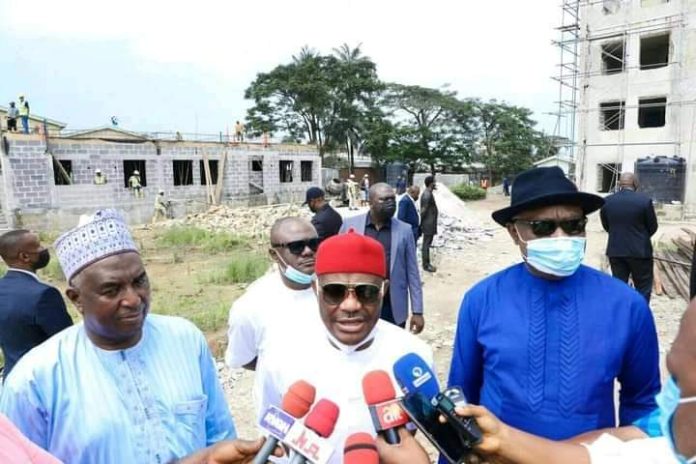 Rivers State Governor, Nyesom Ezenwo Wike says the Nabo Graham Douglas Campus of the Nigerian Law School in Port Harcourt will stand out as an eloquent contribution of the State towards the growth of legal education in the country.

That is why, he said, the best facilities and attention are being given to the ongoing structural work in order to match the furnishing aspect later, so that it will be the envy among other Law School campuses.

Governor Wike made the assertion shortly after inspecting the progress of work on the main campus and the staff quarters of the school on Friday.

The Rivers State Governor had in his company the Chairman of the Council of Legal Education, Chief Emeka Ngige and the Director General of Nigerian Law School, Prof. Isa Hayatu Chiroma.

Governor Wike stated that every responsible government will attract the institutions to be sited within its jurisdiction and to secure the desirable benefits.

The governor also said that the economy of the state will enjoy a boost because of the establishment of the Law School in Port Harcourt.

“So, as part of our own contribution and the training of our lawyers, this is to see that the best of the quality is given to them by providing the best of the facilities that they require.”

Governor Wike explained that the intermittent inspection visit he undertakes with the chairman of the Council of Legal Education and the DG of the Nigerian Law School is to ensure that what his administration promised is what is been provided.

According to him, but for the intense rainfall that have been experienced, construction work at the site of the project would have been concluded.

Governor Wike however, assured that work on the main campus of the Law School and the staff quarters will be completed within the agreed schedule.

“But now that the rains are subsiding, I believe by December, anybody who comes here will see a different thing.

“They (workmen) have started roofing in the main campus, I believe that anybody who goes there will see that the environment has changed dramatically. So, one is quite impressed.”

On his part, the chairman of the Council of Legal Education, Chief Emeka Ngige (SAN), said having tour round the project site of the campus in Rumueme and the staff quarters located beside Hotel Presidential, they are impressed with the quality of work seen.

He noted that the Nabo Graham Douglas Campus of the Nigerian Law School is being constructed by the Rivers State Government at no expense to the Federal Government and the Council of Legal Education.

According to him, this is not the only project that Governor Wike is doing for the Council of Legal Education and the Nigerian Law School, because similar gesture is extended to the Yenagoa Campus of the Law School.

“And we cannot thank His Excellency enough for the attention he has given to this project in fulfilling his promise to the Council of Legal Education, Nigerian Law School and the legal profession that he will deliver this project in less than eight months of commencement of work.

“And we are happy that he is fulfilling that promise and work is going on in earnest. We shall pass the information to Council and other stakeholders and the Attorney General of the Federation that work is going on as scheduled.

“We shall be getting prepared for the commissioning at the appointed date and also start preparation for students that will be posted here in the next academic session been the end of 2021.”

Also speaking, the Director General of Nigerian Law School, Prof. Isa Hayatu Chiroma (SAN) described as fantastic, the progress of work that has been accomplished on the project sites in comparison to what was on the last time he visited.

“We are going to go back to our major stakeholders, the Council, the Honourable Attorney General of the Federation as well as other stakeholders in the legal profession. We thank His Excellency for this wonderful job as well as the speed at which he is taking this job.”

EFCC Nabs Lebanese with Over $2m at Abuja Airport