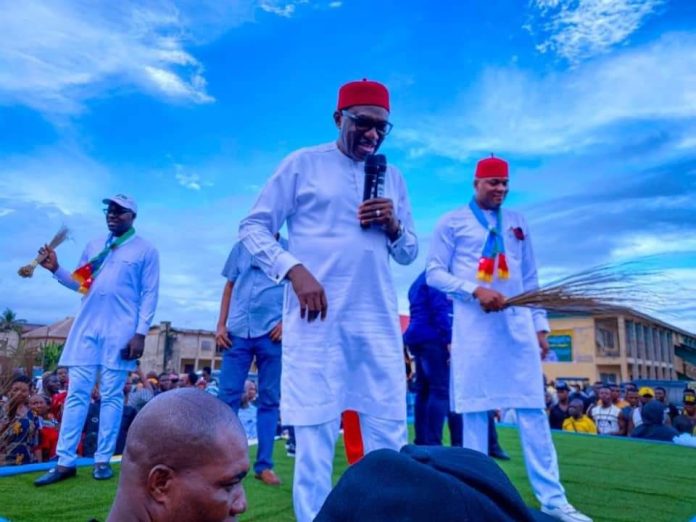 …as polls by US-based agency indicate an APC victory

Once again, it has become necessary for Senator Andy Uba Governorship Campaign Organisation, SAUGCO to react to a last ditch attempt by the outgoing All Progressives Grand Alliance, APGA administration to affront the victory march of the All Progressives Congress, APC in this week’s gubernatorial election in Anambra state.

“It’s a shame that this latest smear campaign is propelled by the projection by leading independent research and political risk consultancy firm, Hallmark International Consulting Company(HICC) that Senator Uba is tipped to win the November 6, 2021 election,” Hon. Victor Afam Ogene, director, Media and Publicity of SAUGCO said in a statement.

HICC had said that “Senator Andy Uba, the candidate of the All Progressives Congress(APC) may win in a hotly contested election with a margin of error of between 3-4 per cent probability ratings in Anambra State governorship election”.

A statement issued on Saturday, October 30, 2021 in Abuja by the Foundation’s Vice President for Africa and Middle East, Hayes Rodney, said the interest of the Foundation in the Anambra governorship election is nonpartisan.

According to HICC, the research and opinion poll was commissioned by a US-based ‘Power to the People Foundation’ – an NGO with an interest in the sustainability of democracy in Africa and around the world.

On the heels of the development, the APGA appears to have taken a recourse to whipping up sentiments against Senator Uba.

This time, using a poorly scripted propaganda material, they claimed that a certain nondescript character, allegedly, ‘confessed’ that Distinguished Senator Andy Uba contracted him to cause mayhem in the state.

The General Public is advised to ignore this concocted tale which could only have emanated from the jaundiced imagination of crude propagandists.

Senator Uba, despite having devoted the greater part of his adult life to the service of ndi Anambra and Nigeria, is a widely acclaimed perfect gentleman who not only detests violence, but has also never being associated with anything of the sort.

If the said Elijah Okoh, said to be a revenue agent, is not a fictitious character created solely for the aim of reputational damage, then he must be an acolyte of the All Progressives Grand Alliance, APGA and its leader, Governor Willie Obiano, who employs all revenue agents in Anambra state. The said Elijah Okoh is a revenue agent according to the imaginative tale, which puts him directly under the watch of Willie Obiano who supervises Revenue Agents in Anambra state.

In fact, we challenge Governor Obiano and the many propagandists in his employ, to produce the said Elijah Okoh, or forever quit playing silly games and face up to the elections holding in few days time.

For anyone living in Anambra state, it is quite easy linking the amateurish authors of the ignoble script to Willie Obiano and the APGA candidate, Professor Charles Soludo to this perfidy, having borrowed their fictional character from the notorious Ikanda, a murderer who worked as a revenue agent in Onitsha and was used by APGA and Obiano to wreak havoc in Onitsha during the 2013 elections. He was later arrested by security operatives for other crimes, but as the 2017 election approached, an entrenched Governor Obiano facilitated his release and deployment to election duties.

What is more! A cursory look at the concocted tale shows that the story has no source and can’t be referenced to anyone. The Parrot News attached at the end of the said article does not also exist, either in print or the internet.

For the avoidance of doubt, Senator Uba and his All Progressives Congress, APC have been insistent on having the Anambra governorship election hold this Saturday, November 6, 2021.

On the contrary, however, Governor Obiano and APGA have been busy using all kinds of excuses and shenanigans to force a shift.

In deed, ndi Anambra and Nigerians at large are aware of those who appear not to be ready for the gubernatorial duel, and are therefore conjuring all manner of excuses, including playing games with security issues, so as to force a stalemate.

With the Independent National Electoral Commission, INEC, other political parties, including the APC and security agencies ready for the polls, we advise Governor Obiano, Professor Soludo and APGA to get up and get ready for November 6, 2021 – and quit playing silly games.