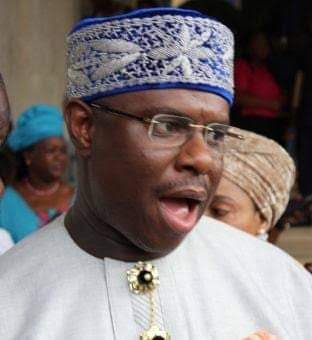 As 2023 electioneering draws nearer, Dr. Dakuku Peterside is intensifying his lying missile against Governor Nyesom Ezenwo Wike and his administration, in a desperate and demeaning bid to impress Rt. Hon Chibuike Rotimi Amaechi and position himself to benefit from the white smoke he lost to Tonye Cole in 2018.

Simply put; out of favour Dakuku wants to be appointed Amaechi’s anointed candidate in 2023 by fire by force, even if it means lying more than lucifer.

In recent months, Dakuku has been running from one radio station to another uninvited, to spew all manner of lies just to become relevant again after being disgraced out of NIMASA by the same Amaechi who conspicuously opposed his second term bid. The latest of such barefaced lies is the gibberish he retched up about the Port Harcourt campus of Nigerian Law School that is currently being constructed by the Rivers State Government.

He unwittingly shot himself in the foot this time because he chose a project that will bring glory and pride to Rivers State to lie about in his latest episode of his lying series.

Dakuku said Governor Wike unilaterally awarded the contract for the project, that is a big lie. On 29 June 2021, Rivers State Executive Council approved the construction of the law school campus. He also asserted that there was no contract bidding process, that is another lie from the pit of hell.
1.) Selective tendering (procurement method) was done.
2.) The project passed through due process and met all requirements and the BoPP (Bureau of Public Procurement) issued certificates of no objection for all 15 lots.

But wait a minute, if Dakuku is so concerned about transparency in public procurement process and contract bidding, why was he silent over the damning exclusive report from Premium Times few days ago about Chibuike Amaechi’s illegal awarded multi billion dollars maritime contract? I guess apart from being a pathological liar, Dakuku Peterside is a hypocrite too.

Before ignorantly lampooning the project, he should have at least seek the assessment of a certified quantity surveyor because it clearly showed that Dakuku was just being the Dakuku we know; I mean the armchair critic who sees no good in anything Governor Wike does or says.

Dr. Peterside should be reminded that this is not like the 14-bed Aso Rock clinic project that APC government wants to use a whopping 21bn to construct, or the over 70bn Amaechi used to erect pillars on a trekkable distance in the name of monorail in Port Harcourt.

The said law school project vis-a-vis its life cycle cost is the true definition of value for money. Unlike the ghost $39.9m Karibi Whyte Hospital that we are still searching for where it is located till date and Dakuku cannot mention it like he talks about Wike’s projects because his master would query him if he does.

I Respect PMB, but I Fear: By Pastor Gideon I...