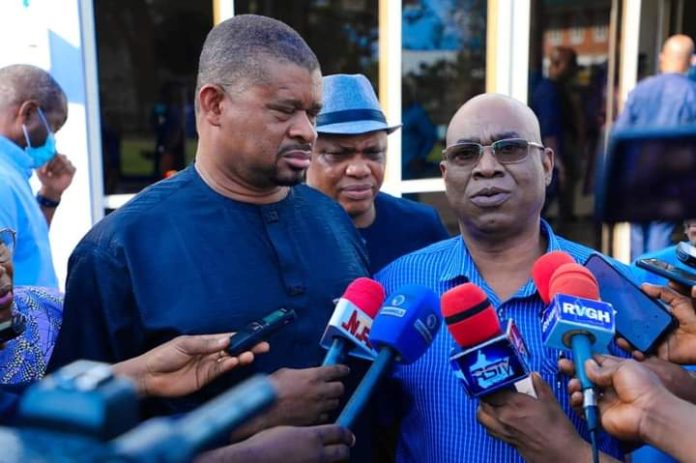 Ogoni stakeholders have met with the Rivers State Governor, Nyesom Ezenwo Wike and unanimously agreed that he lead a multi-consultative forum to discuss with Federal Government on the planned resumption of oil production in OML 11.

The stakeholders said the choice of the governor was aimed at preventing saboteurs who may want to adopt divide and rule tactic to cause crisis in Ogoni at the detriment of the people.

Briefing journalists after the closed door meeting held at the Executive Chambers of Government House, Port Harcourt on Thursday, former President of the Movement for the Ogoni People (MOSOP), Ledum Mitee said the meeting with Governor Wike is sequel to the meeting, a delegation of Ogoni leaders had with President Muhammadu Buhari a couple of weeks ago in Abuja.

According to him, the Ogoni delegation to Abuja discussed a number of issues and it was important to brief Governor Wike on those issues.

“We reviewed the outcome of that meeting and we, as a people resolved that, the issues that were discussed are such that required partnership with the state government.

“In other words, we felt that the Government of Rivers State and Ogoni people would work together to pursue some of those issues that were raised as outcome of that meeting, specifically on the issues of OML 11 and resumption of oil.

“We felt that it required some sustained and painstaking consultation process which must involve the State government as partnering with us and its leadership on how we will go together to work. So that, some divide and rule will not be exploited to the detriment of our people.”

In his briefing, Senator Lee Maeba said the Ogonis are resolved to file behind the leadership that will be provided by Governor Wike concerning the setting up of a multi-consultative forum.

Maeba stated that President Buhari had issued directives, particularly as it has to do with the OML 11 whose licence has been granted to NPDC, there is need for the NNPC to consult and dialogue with Ogonis.

“So, this meeting today was the Ogonis coming to tell the governor about that and we have resolved that the governor must lead the multi-consultative forum to discuss with the federal government about any issue concerning OML 11 resumption or non- resumption of oil. So, we are united under the State government.”

On his part, Senator Olaka Nwogu, said they are resolved and have willfully given authority to Governor Wike to offer the leadership that will serve as a pathway to multidimensional, multigroup and elicit multi organisational response to the oil issue in Ogoni land.

On his part, Senator Barry Mpigi, said before any further discussion with the Ogonis, the presidency should quickly complete the East-West road and expedite action on the clean up exercise.

A prominent Ogoni women leader, Chief Priscilla Vikue said her people are united and will not allow anyone pass through back door to take Ogoni oil.