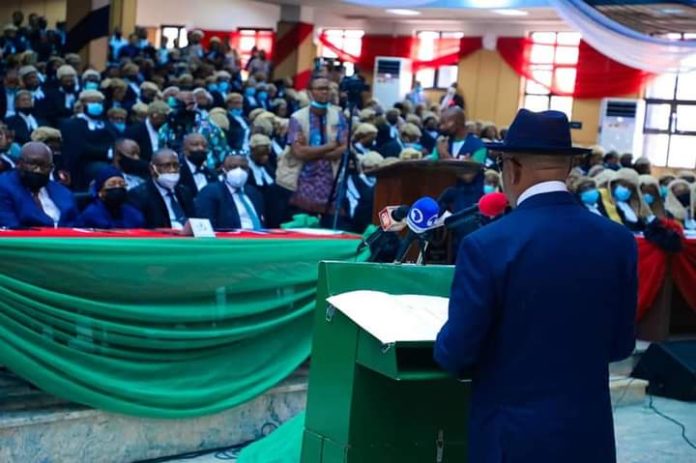 Rivers State governor, Nyesom Ezenwo Wike said the invasion of the residence of Justice of the Supreme Court, Hon. Justice Mary Odili, is a precursor to Federal Government’s infamous tactic of browbeating the judiciary to a state of fear and conformity as the country enters next political season.

The governor said the Federal Government wants to continue to ride roughshod unchecked over the rule of law and the sanctity of the country’s electoral system, hence, the renewed attack on judicial officers.

The Rivers State governor made this assertion at a special court session to mark the opening of the 2021/2022 Legal Year of the Rivers State judiciary held at the Chief Judge’s ceremonial court, Port Harcourt on Thursday.

“Although it is still early morning in our democratic match towards 2023, the attack on Justice Mary Odili is a prelude to many more and even worse political manoeuvrings we should be prepared to experience from the APC-led Federal Government, which having lost relevance and popular support is becoming more and more desperate over its dwindling political fortunes by the day.

“While cases with political undertones, including the constitutional validity of certain sections of the recent amendments to the 2010 Electoral Act, if assented to by Mr President, would necessarily come before our courts; what is important is the duty and capacity of our judiciary to save our democracy and the country.”

He noted that it is the responsibility of the Government at all levels to protect the judiciary and accord the Courts with such assistance as they may require to enable them to safeguard their independence, advance the rule of law and dispense justice equally and fairly to all citizens.

According to him, unfortunately, while the present Federal Government has been very weak in resourcing and strengthening the judiciary; it has been very strong and readily predisposed to ridiculing the entire institution and subjecting individual judges to both physical and psychological trauma for its own self-interest.

“We all witnessed the infamous midnight raids on judicial residences and the subjection of some judges, to illegal raids, arrests and detentions by agents of the Federal Government purportedly carrying out a baseless sting operation back in 2016.

“Since then the intimidation of judges whose judgments, intellectual or moral disposition they are not comfortable with has continued unrelenting with the latest attack on a peaceful mother, wife of a former Governor and Justice of the Supreme Court, our own highly revered Hon. Justice Mary Odili.

“It is important to emphasize that we allow these intimidations to become acceptable standards of behaviour and even become complicit in their unholy design to undermine the administration of justice when we all opt to keep quite in the face of these assaults.”

Governor Wike , who commended the leaders of the Nigerian Bar Association, the Body of Senior Advocates, the Chief Justice of Nigeria and members of the public for promptly condemning the idiotic siege on judiciary, said they must quickly move beyond the verbal protestations to unveil those behind the raid on Justice Odili’s residence and ensure that they all are held to account for their actions, otherwise this impunity would never cease to rear its ugly head in the country.

He challenged the Federal Government to come clean on this infamy with the names, identities and affiliations of those allegedly arrested for their roles or found to have been involved in the attack on the residence of Justice Odili, if it is not to be perceived as the primary mastermind.

Speaking on the proposed proliferation of Law School campuses, the governor urged the management of the Nigerian Law School, the Council of Legal Education and the Federal Government to see the folly in the plan, and nib the idea from the bud before it causes more damage to a foremost institution that is already severely challenged for lack of adequate funding.

He explained that the Port Harcourt Campus of the Nigerian Law School being built by the State government was consciously demanded for and approval secured from the Council of Legal Education and ultimately from President Muhammadu Buhari, through the Attorney-General of the Federation and Minister of Justice and named after late Nabo Graham-Douglas, SAN.

“Here again, some lazy and uninformed characters have criticised our Law School development project with the unfounded and lousy allegation that it lacks budgetary provisions in our 2021 budget, even when they conceded to the propriety of the project and the optimal benefits it would attract to the State and the business community.”

Governor Wike said in the last six years, his administration has continued to improve the welfare and wellbeing of State judicial officers, especially, the provision of new cars, comfortable and well-resourced offices, as well as the provision of life-long residences for all judicial officers, including those serving in Federal courts and other jurisdictions external to the State.

Chief Judge of Rivers State, Hon. Justice Simeon Chibuzor Amadi said since assumption of office in May 2021, he has administered the judiciary with commitment in order to raise the bar of performance of judicial officers and staff that should reflect in speedy dispensation of justice.

According to him, training sessions have been organised for manpower capacity development in mediation practices, infrastructure improved, and the magistracy practice laws and rules revisited for purposes of review.

Justice Amadi stated that of the 30227 cases, 11719 cases were disposed off and warned that no application from any lawyer for a transfer of cases will be tolerated if such case has already entertained at least two witnesses in court.

“The grand total of fees and fines generated or realised by the project registry, deputy sheriff office, appeal registry, archives and records, the high court, magistrate court, mobile courts, and sanitation courts, within the period under review is N376,159, 369.74 kobo.

In his speech, the Rivers State Attorney General and Commissioner for Justice, Prof. Zacchaeus Adangor, SAN, said it is imperative for members of the Bench and Bar to reaffirm their unwavering commitment to the effective, efficient and speedy administration of justice in order to continue to enjoy the confidence of Nigerians.

Prof. Adangor opined that it is difficult to imagine a Nigeria’s society without the court system because the whole concept of the rule of law, and cherished constitutional democracy will have no meaning if the needless attack on the judiciary that undermines civilisation is left unchallenged.

The former President, Nigerian Bar Association (NBA), Onueze C.J Okocha, SAN and the NBA Port Harcourt branch, Prince Nyekwere respectively condemned the attack on the residence of Justice Mary Odili. And demanded that the perpetrators be apprehended and prosecuted

In his sermon, Archbishop of the Province of Niger Delta, Most Rev. Blessing Enyindah charged the judiciary to remain committed to upholding the law and do justice to everyone equally despite the status.

He pointed out that Nigeria cannot be a great country if its laws that are reasonable and designed for the well-being of the people is skewed and violated by the judiciary because it is unable to administer unbiased justice.