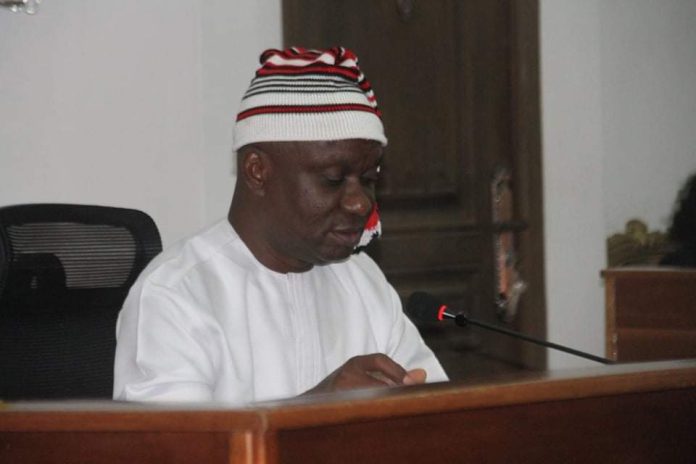 The Abia State House of Assembly commenced plenary after the adoption of Votes and Proceedings of Tuesday, 12th October, 2021.

The Speaker announced to the House that Sir JohnPedro Irokansi, Clerk / Permanent Secretary of the Abia State House of Assembly has successfully completed and acquired his Doctorate, PhD, from the Abia State University, Uturu. The Speaker, on behalf of all the Members, congratulated and felicitated with him on his new status.

Hon Ginger Onwusibe, Member representing Isiala Ngwa North said he was specially inviting the Speaker and his other colleagues to the commissioning of Lady Nkechi Ikpeazu Primary Health Center, a project he initiated, constructed, completed and equipped with medical equipments in his constituency.

He said the commissioning of the project which will be done by Governor Okezie Ikpeazu is slated for 24th November, 2021 by 10am.

Hon Barr Emeka Okoroafor, Member representing Isuikwuato State Constituency is sponsor of the Motion for the implementation of Section 126 of Abia State Local Government Law (No.2) of 2006 which provides for the establishment of a Traditional Rulers Council in every Local Government Area of Abia State.

“The welfare and the security of the people are the primary responsibilities of every government including the Local Government authorities. Security challenges of kidnapping, banditry and farmers-herders conflicts in our various Local Governments and communities are on the increase.

“The issue of security as an emerging rule is a shared responsibility between the Traditional Institution, Community Vigilante groups and the Conventional Security Agencies”, Hon Okoroafor explained.

He further said that the 5% provided for in the aforementioned Local Government Law is for the effective discharge of this shared responsibility by the Traditional Rulers as Chief Security Officers of their communities among other things.

1. That the House do mandate the Chairmen of the Local Governments in the State to implement the provisions of Section 126 (2) of the Abia State Local Government (Amendment No.4 ) Law 2015 to ensure that the said statutory 5% deducted from each Local Government’s Allocation is regularly released to the Traditional Rulers Council in every Local Government to enable them discharge their responsibilities creditably as well as effectively fight crimes in various autonomous communities.

The Speaker said the House will deliberate on the prayers put out by Hon Emeka Okoroafor concerning H.A.M. 17 on the next Legislative Day.

In a motion moved by the Majority Leader, Hon Solomon Akpulonu and seconded by Hon Mike Onyekwere Ukoha, items on the Order Paper were deferred to be considered on another Legislative Day.