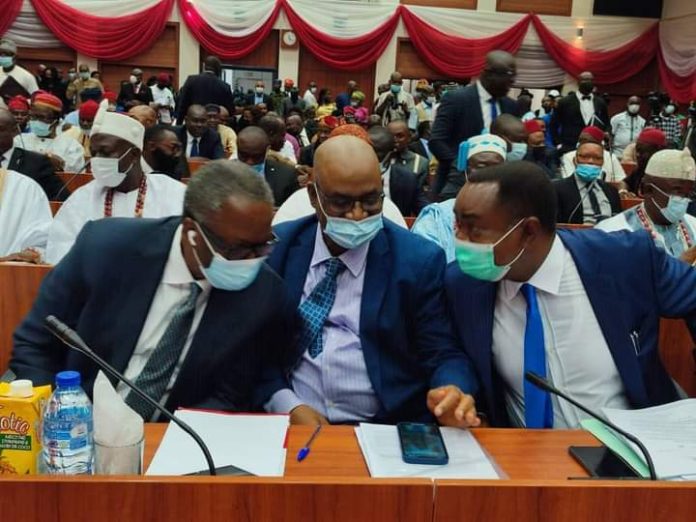 The Senate has acknowledged the approval by the Council of Legal Education for the establishment of the Nabo Graham Douglas Campus of the Nigerian Law School.

Bamidele, stated this in his opening remark at a public hearing on Legal Education (Consolidation, Etc) Act L.10, LFN 2004 (Amendment) Bill 2021 (SB 820) at the Senate on Monday.

He said the intent and purpose of the bill is to enhance the justice sector to be in time with trends and practice as obtainable in other jurisdictions.

“It is instructive to note that during debate on the general principles of the bill at various sittings of the Senate, divergent views were canvassed by distinguished senators, thereafter myriad of reaction was stimulated from relevant stakeholders and member of the public on the rationale of enacting the bills as act of the National Assembly.

“Consequently the committee resolved to adopt the legislative mechanism of conducting this public hearing in order to gauge and aggregate the view point and opinion of relevant stakeholders in our bid to further strengthen and enrich the legislative process.”

Senator Smart Adeyemi, who sponsored the Bill that is intended to create at least two campuses the Nigerian Law School in each geopolitical zone, said Port Harcourt campus will not be affected by the amendment.

“There is already approval for a Law school in Port Harcourt, and that will be accommodated.”

The Rivers State Attorney General and Commissioner of Justice, Professor Zacchaeus Adangor, SAN, in a memorandum submitted to the committee, urged the National Assembly to reject the Bill 2021 as presently constituted, because it is oppressive and discriminatory against the Government and people of the State.

According to him, President Muhammadu Buhari ,through the Attorney General and Minister of Justice of the Federation, Abubakar Malami, SAN, had consented to the request and work has reached advance stage.

Speaking on the proposed establishment the bill, Senator Kashim Shettima said Governor Wike has further demonstrated that he believes in the Nigerian project by investing in the construction of a brand new campus of Nigerian Law School in Port Harcourt.

“If someone can singularly build a Law School, he who comes to equity as you lawyers say, must come with not only clean hands ,but the ability to add value and he (Wike) has added value by giving a Law School, and justice and equity demand Law School should be established in Port Harcourt.”

The chairman of Council of Legal Education, Chief Emeka Ngige, SAN, observed that there was an erroneous conception that by creating Port Harcourt campus, the council had created a new Law School.

He explained that Governor Wike during a visit to the Yenagoa Campus with the Director General of the Law School, had been appalled by the decrepit infrastructure on the campus, and offered to build two hostels and one auditorium, valued at N5billion.

Ngige said during the flag off of the two hostels and auditorium at the Yenagoa campus, Governor Wike had offered to build a brand new campus in Port Harcourt if the Council of Legal Education gives approval.

“We didn’t agree there. We had to follow due process. We went back to the our supervising ministry, the Ministry of Justice to table the offer by His Excellency, the governor. The Minister in turn took it to Mr. President (Muhammadu Buhari) and Mr. President gave his approval. That was how Port Harcourt campus came.”

He declared that the establishment of the Port Harcourt campus was devoid of sentiment or politics.

According to him, the Rivers state government is presenting constructing two hotels that will accommodate 1500 people, an administrative block, medical centre, lecturers quarters among others.

Impressed by the infrastructure being provided by the Rivers state government, he said the Council now has a guideline, tagged the ‘Rivers’ model’, that will be used as a yardstick to accept or reject any proposal for the establishment of any additional campus.

According to him, approval for the Port Harcourt followed through all the mechanism set for such approval.