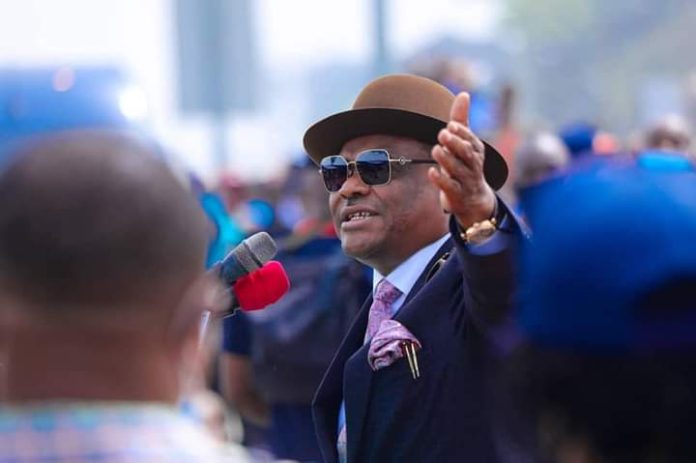 Governor of Rivers State, Nyesom Ezenwo Wike says the Federal Government, inadvertently, promotes corruption whenever it allows paltry sums of money, in its yearly budget for a project, instead of the entire money required to complete such projects within the agreed time.

The governor made the observation while speaking at the inauguration of the GRA Junction Flyover project that was performed by Mike Agbedor Ozekhome, SAN, on Saturday in Port Harcourt.

He said such practice encourages variation of the value of the projects, elongates the time specified to complete such projects and most often, leads to abandonment.

“You know, I don’t like the word variation. It is not in my dictionary. That is where you see corruption. That is why when you see federal government budget; how can you award a job of N60billion, then in the budget of the year, you put N2billion.

“What kind of contract is that? Why will there not be variation. That job will last in the next ten years and that is the problem we have in our contract execution.”

Governor Wike explains that in such situations, the contract value becomes affected by inflation and there is a likelihood of adjustment of the items, which eventually breeds corruption.

He pointed out that such culture is not encouraged in Rivers State under his administration and there is no rationale for him to spend four years, for example doing a particular project.

“Now, if you’re putting N2 billion each year, that means in ten years time, it’s N20 billion. So you cannot finish the project in 20 years. And then, looking at the inflation trend, every year, the contractor will put variation. Why?

“Because the price of things have gone up. So, they’ll put variation and at the end of the day, the job will not be N60 billion. It will go to N80 billion.

“But here, Julius Berger cannot tell us that because we have already given them 70 percent upfront. So, they cannot come and tell me variation, no. By giving you 70 percent, we expect you to work up to 80 or 90 percent.”

Governor Wike stated that days were gone when politicians give excuses to cover up their lack of leadership capacity.

He boasted that no administration can measure up to what he has done within six years in terms of project infrastructure in the state and the completion of five flyover bridges with four ongoing and one about to be awarded.

Speaking further, Governor Wike asserted that the quality projects executed in the state are sufficient testament to electorate in the state to continue to vote for the Peoples Democratic Party (PDP) when the elections comes.

He advised who ever will become his successor not to award projects if there is no money to complete them as agreed.

“Anybody that is taking over from us, know that we have campaigned for the person. The campaign is over. That is why everybody is jostling to be governor because they know what I have done. I have cleared the road, so everybody is saying I want to be governor.”

The governor vowed not to abandon the Trans-Kalabari road despite attempts by some hoodlums who kidnapped workers handling the multi-billion Naria project.

Performing the project inauguration, legal luminary and human rights activist, Mike Ozekhome, SAN, said Governor Wike has through the execution of numerous infrastructural projects , demonstrated transparency and accountability in the management of the resources of Rivers State

“He has shown that it is not enough for a governor to get his monthly allocation from the revenue account under Section 162 of the constitution but without showing evidence of what you are using that money for.”

He further commended the governor for showing that investing in human capacity is the best way to live in the heart of the people.

“He has shown that he possesses the capacity to develop the people, not just in terms of infrastructure, but in terms of their education and human capacity building.”

Providing the description of the project, Rivers State Commissioner for Works, Elloka Tasie-Amadi explained that construction of the GRA Junction Flyover is intended to solve traffic conflicts experienced at the intersection of Port Harcourt-Aba expressway, Ezimgbu road and Tombia Street.

“This flyover built by Messers Julius Berger, has 2 Service lanes on either side of the bridge, each measuring 7.3m in width and 775m in length. You will find a round about, pedestrian underpass, midway turns, traffic and streetlights within the project.

“The bridge itself is 502m long with the suspended section being 292m. It has 4 lanes, in dual carriage configuration with 2 lanes of 7.3m width headed in either direction both separated by a median. As is our standard practice in the construction of road infrastructure, the carriage way is finished with 2 layers of Asphalt, a Binder course and a wearing course.”

We Have No Hand In Buhari’s Cambridge Documents, WAEC Official Tells...