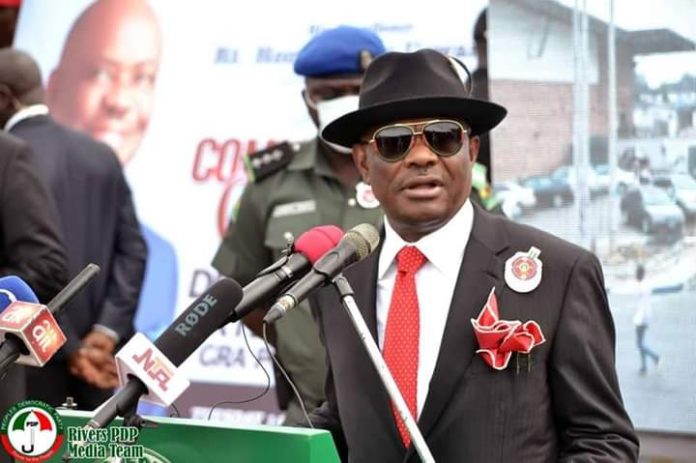 The governor made the statement to appreciate the support given by the people of Rumueme community to the Peoples Democratic Party (PDP) controlled Rivers State Government.

Speaking at the inauguration of Tombia Road Extension in Obio-Akpor, that was performed by the Enugu State Governor, Rt. Hon. Ifeanyi Ugwuanyi, Governor Wike said the project is another fulfillment of promise made to them.

“And to God be the glory, they have seen the fruit for supporting PDP. The Law School is in Rumueme community. What support can you need; facilities can bring out the name of a community.

“If the Nigerian Law School opens tomorrow, Rumueme will be household name in the entire Nigeria. It is not only money that you get and you think you’ve gotten dividend. But the name alone that so and so institution, or establishment is in your community, money cannot buy it.”

Governor Wike said he had often reiterated the need for people to understand that government is not only about making promises but also include a commitment to fulfilling those promises.

And the best way to ensure that those promises are fulfilled, he explained, is to hold politicians accountable to what they say and do.

This, he said, will ensure that such politicians do not turn around later to offer excuses for their failure in keeping the promises they made when another opportunity pushes them to come seeking fresh political support.

“Not tomorrow, you forget and somebody will come and tell you, you know we made mistakes, but now we are ready to correct the mistakes. Tell them, there is nothing to correct again.

“The party we know that has told us yesterday that they’re going to do this, they have done it. So, we want to continue to remain with that party that made promises to us and fulfilled those promises.”

Performing the inauguration, Enugu State Governor, Rt. Hon. Ifeanyi Ugwuanyi noted that the strategic and high utility road is at the heart of Port Harcourt metropolis.

“I recall that on the 5th day of January 2021, I had the occasion to be with you on a similar invitation to commission the then new dualised Saakpenwa-Bori Road that serves Ogoni heartland.

“It was a fulfilling experience and I returned to the coal city state with good tidings of exciting progress and great hope for infrastructural development in Rivers State, the treasure based of the nation.

“Today’s experience evidences a quantum leap in the infrastructural development of this great state and I dare say that my brother, the governor of Rives State is truly Mr. Project.”

Speaking further, Rt. Hon. Ugwuanyi said Governor Wike is a veritable source of pride to the PDP, and represents the best of the best in project implementation.

According to him, Governor Wike inspires great choice and confidence in the nation’s constitution and democracy.

Rivers State Commissioner for Works, Elloka Tasie-Amadi said prior to the reconstruction and dualization of the Tombia Extension Road, it was a 6.5m wide single carriageway with open drains, no sidewalks and no streetlights.

But today, he stated that, it is a dual carriageway, 7.3m wide headed in either direction, separated by a 0.75m wide median, with covered drains and walkways on either side.

He pointed out that on the whole a total project width of 18.35m is seen that is beautifully adorned with street lighting.

“As it is our standard, the road pavement starts with a sub base of sharp sand, stabilised with a 5% sand cement mix, topped with stone base course, primed with bituminous coating to receive the first asphaltic concrete layer after which we top it off with the second asphalt wearing course, leaving you with a total asphalt thickness of 10cm or 4 inches if you may.”

Tasie-Amadi further said that the difference between what then was and what now is, makes a world of difference in terms of speed, travel time, convenience, aesthetics, property value appreciation and much more.

He stated that these and more are some goals of the Urban Renewal Program of Governor Wike who is determined to leave the State in better infrastructural shape with each passing day.

“This dualisation offers to commuters a world of ease, and to property owners, great improvement in their property location, accessibility and value.”