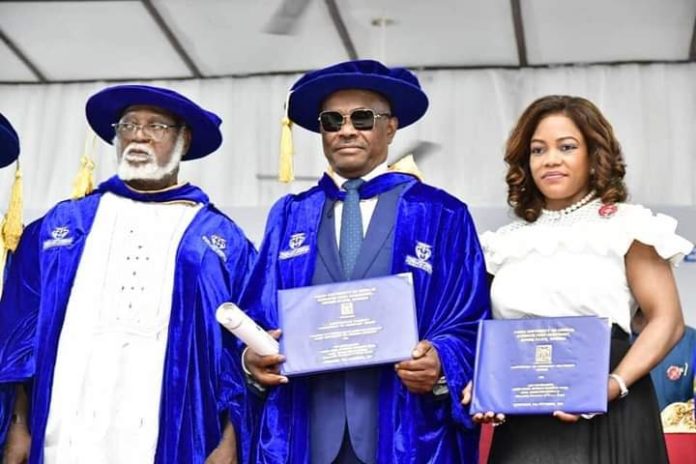 General Abubakar, who is also the Chancellor and Chairman, Board of Trustees of the University was conferred with Doctor of Letters (D.Litt.) Honoris Causa, while Governor Wike bagged honorary degree of Doctor of Science (D.Sc.) Honoris Causa.

The awardees were on Saturday conferred with the honorary doctorate degrees during the first PUMS convocation ceremony in Port Harcourt, for their distinct contributions to the development, peace, democracy and general good of Nigeria.

According to him, the governor’s unrivalled contribution to the development of the University will forever be in the annals of her history.

The former Head of State noted that the success of PUMS is a demonstration of what can be achieved when State Governments come in to support the provision of private education in their respective States.

He urged the Federal Government to extend similar support to private universities through the Tertiary Education Trust Fund and other agencies of government through the various initiatives currently being enjoyed only by public institutions.

Governor Wike in his acceptance speech said the government and people of Rivers state are delighted with the establishment of PUMS, and the vast opportunities it has availed youths in the State to become highly educated and skillful medical professionals and practitioners.

He said the state government has maintained and sustained a close, symbiotic and mutually beneficial relationship with the University from its inception to date, by identifying with and contributing materially to its steady growth and progress.

“Back in 2017, we instituted a special public scholarship, covering tuition, accommodation and feeding to encourage our indigenous students to take advantage of the University and become graduates and professionals of the areas of interest.

“We have religiously implemented this scholarship programme for four consecutive years with almost 600 beneficiaries as at the last academic session.

“Today, I am very pleased to note that all the graduating students of Rivers State origin are scholars of the Rivers State Government educated and trained with public funds.

“In addition to the scholarship, which now costs well over 2.9 billions of Naira to implement annually, we have also made several generous financial donations towards the infrastructural development of the University.”

He commended former Rivers State governor, Dr. Peter Odili, for establishing the first and only private medical university in the entire South-South geo-political region of Nigeria.

The governor, who attributed his success in life to his faith in God and education, said his political life, just like that of Odili, has been a lesson in devotion, hard work and passion for success and service.

He narrated how his predecessor and current Minister of Transportation, under whose administration he served as Chief of Staff, tried to truncate his political career.

“But midway into his first tenure, I got the signal early enough that I have become a foe and penciled down to be politically, brought down, extinguished or terminated.”

Governor Wike explained that although his predecessor had reluctantly included his name among those he nominated to former President Goodluck Jonathan to be appointed as minister, he was never his first or preferred choice.

“He therefore worked twice as hard behind the scene to truncate my confirmation by the Nigerian Senate but failed because God said otherwise.

“Moving further forward and when he noticed my ambition to succeed him as the Governor of Rivers State; he immediately drew the battle line and vowed that I could only succeed him over his dead body.

“Our contest was as intense and jugular as typical political enemies. Ultimately, I won and prevailed over him; but he acted the coward by refusing to commit the suicide he had promised if I became the Governor of Rivers State. Thank God he chickened out and did not die.”

The Executive Secretary of the National Universities Commission, Professor Abubakar Adamu Rasheed, who delivered the convocation lecture, said private universities have continued to play a vital role in the national development of Nigeria.

He said PAMO University is currently the 19th best private university, and 35th best out of 200 universities in the country.

The Pro- Chancellor and Chairman of the Governing Council, Dr. Peter Odili, said the management of the institution remain unapologetically committed to total compliance to the rules and sanctions for any breaches by staff and students.

He lauded Governor Wike for offering scholarship to over 600 Rivers State students to study medicine and allied medical courses in PAMO University.

The Vice Chancellor of PAMO University, Professor Michael F.E. Diejomaoh announced that the university graduated 21 students from the Department of Anatomy, Biochemistry, Pharmacology and Physiology.

He explained that all courses in the faculties of Basic Medical Sciences and Allied Health Sciences have been fully accredited by the NUC with high scores.
Governor Wike later inaugurated the ultra model the Emmanuel Aguma hostel in the campus.

Show Love To One Another This Month OF Valentine Chief,...