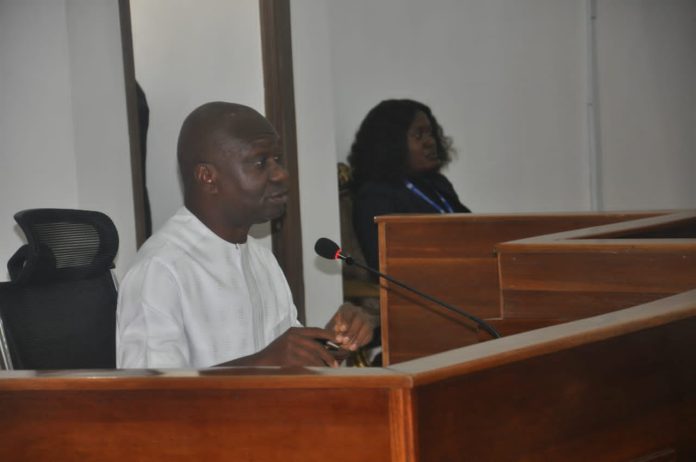 Welcome to another Legislative Day in the 7th Abua State House of Assembly.

The Speaker, Rt Hon Chinedum Enyinnaya Orji led other Principal Officers into the hallowed chamber of the House.

The Speaker welcomed his colleagues to the Plenary session of the day, Monday, 7th February, 2022.

The Speaker welcomed his colleagues to he day’s legislative business.

The Abia State House of Assembly commenced plenary after the adoption of Votes and Proceedings of Tuesday, 1st of February, 2022 as a working document.

A correspondence from the Governor informing the House about the nomination of Hon Justice Okey Ikechukwu Nwamuo as President, Customary Court of Appeal, Abia State.

The Speaker also announced that Hon Justice Okey Ikechukwu Nwamuo had interacted with House members in the Executive session and that members had mandated him to announce the confirmation of Hon Justice Nwamuo as President, Court of Appeal, Abia State.

Presentation of the Report of the House Committee on ASOPADEC and Petroleum Matters on the Petition titled: “Alleged Continuous Marginalisation of Umuorie Asa-Isimiri Autonomous Community in Ukwa West Local Government Area by the State Government”.

The Majority Leader, Hon Solomon Akpulonu moved a motion that presentation of the Report be deferred to another Legislative Day based on the fact that Chairman of the committee was not present in plenary.

The House therefore voted in favour of deferring presentation of the report to another Legislative Day.

H.A.B 54: The Majority Leader, Hon Solomon Akpulonu moved a motion that H.A.B. 54, “A Bill for a Law to provide for the conversion of the Abia State Polytechnic, Aba, to University of Aba and for other related purposes” be considered for First Reading.

The motion was seconded by Hon Aaron Uzodike (Aba North).

The “Bill for a Law to provide for the conversion of the Abia State Polytechnic, Aba, to University of Aba and for other related purposes”, sponsored by Hon Solomon Akpulonu, passed First Reading.

Hon Solomon Akpulonu moved the motion for H.A.B. 53, “A Bill for a Law to Establish the Abia State University of Medical and Healh Management Technology and for other related purposes”, sponsored by Hon Thomas A.C. Nkoro, to pass First Reading.

The motion was seconded by the Deputy Whip of the House and Member representing Umuahia North, Hon Kelechi Onuzuruike after which the Speaker put it up for vote. The Bill passed First Reading.

The Bill is to be known as “Abia State University of Medical and Health Management Technology Bill, 2022.

H.A.B. 36: A Bill for a Law to provide for the Establishment, Operations and Functions of the Abia State Watershed Management Agency and for other Matters Related therewith”.

The motion was seconded by Hon Ginger Onwusibe (Isialangwa North), and fter it was put to vote, the Bill passed Second Reading.

The Speaker therefore called on the Deputy Whip, Hon Kelechi Onuzuruike (Umuahia North), sponsor of the Bill, to lead the debate.

In leading the debate, Hon Onuzuruike highlighted the merits of converting ABIA NEWMAP to an AGENCY – ABIA STATE AGENCY FOR EROSION CONTROL AND WATWRSHED MANAGEMENT:

1. As the World Bank hands off from funding erosion control activities under NEWMAP as a project, transiting to an AGENCY is a pre-condition to benefit from funding by the European investment bank for the next two years.

2. The work of NEWMAP as assisted by the World Bank was a pilot programme through which the state must have built capacity for global best practices on erosion control methods. With the Agency, the state will continue with work on erosion control and watershed management in the state. There are over 300 identified gullies in the state that require attention.

3. As an agency, it will have the power to address all other forms of environmental degradation and be a one-stop point for all such interventions in the state

4. It will act as a statutory body that can go into liaison with other multilateral bodies globally to address challenges of environmental degradation

5. It will serve as a platform for capacity building of Abia state civil servants based on lessons learnt while operating as a project

6. As an agency, it will have the responsibility of addressing several cases of incipient gullies before they develop into large gullies that require very large sums of money to remediate.

Hon Jerry Uzosike (Umuahia South) in supporting the Bill informed that the World Bank recently announced that NEWMAP will close in the first quarter of 2022 and that for the state to continue enjoying the benefits of the agency, she needs to domesticate the NEWMAP Law. He also said that the already trained staff of NEWMAP will be inherited by the about to be created state NEWMAP rather than allow them.back to the respective offices they were deployed from.

On his part, Hon Ginger Onwusibe (Isiala Ngwa North) in also supporting the motion said anything that could be done to tackle erosion and other environmental issues in the state should be done expeditiously.

Hon A.C. Nkoro (Obingwa West), also supported the Bill saying watershed management is a process and not anything that should be done haphazardly but be backed by a Law.

In concluding, the Speaker, Rt Hon Chinedum Enyinnaya Orji said having listened to the arguments canvassed for the Bill, it becomes expedient to commit it, H.A.B. 36, to the Committee of the Whole.

Mr Clerk therefore announced consideration of H.A.B. 51, “A Bill for a Law to provide for the Establishment of Abia State Economic Planning Board and for other related purposes” as the next item on the Order Paper.

The motion was supported by Hon A.C. Nkoro.

The Speaker reiterated the motion as moved and put it up for vote. With Members voting in favour of the Motion, Plenary was adjourned to Tuesday, the 8th of February, 2022 at 10am.