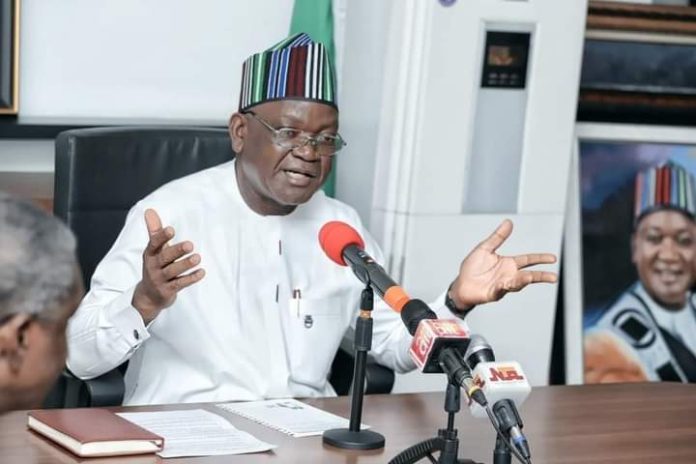 Benue State Governor, Samuel Ortom has urged the Federal Government to take the alarm raised by the Borno State Governor, Professor Babagana Zulum on the recruitment of more fighters by the Islamic State of West Africa Province, ISWAP seriously.

Governor Ortom in a similar vein has also called on the government and non governmental organizations to evolve security strategies that will see the return of Internally Displaced Persons, IDPs back to their ancestral homes without delay to continue with their normal life activities.

According to the governor, “i want to lend my voice to what my colleague in Borno State, Prof Babagana Zulum has cried out against the activities of ISWAP in that part of the country. The Federal Government should not take this alarm from the threats of ISWAP lightly.”

The Governor then urged the Federal Government to “take proactive steps to send away the terrorists away from Nigeria so that we can live in peace. We can not continue this way. Nigeria deserves more peace than what we have now,” he stated.

Governor Ortom spoke Tuesday at the Benue Peoples House Makurdi when he received a delegation from the Victim Support Fund, VSF, led by its Chairperson, Mrs Toyosi Akerele Ogunsiji also called on leaders of the country to speak up and not remain silent in the face of insecurity.

He regretted that immediately he came in as Governor in 2015, he foresaw the danger of allowing the activities of Fulani militia herdsmen to fester for long without a permanent solution, the result of which we he said, “we are seeing today.”

He however noted that “the strategic support we want now is enable our people living in the IDPs to return to their ancestral lands. Our people want to go back to their communities so that they can live their normal lives.”

Governor Ortom stated that his idea of conducting a mass burial for victims of the January 1st, 2018 killings by militia herdsmen was meant to draw attention to the security situation in the country, saying leaders at all levels need to speak out against the ills in the country.

The Governor commended the VSF under the leadership of retired General Danjuma for intervening in some critical areas in the plight of the IDPs in Benue, describing the elder statesman as forthright and outspoken on national issues.

Governor Ortom called on VSF to intensity support in the areas of improved healthcare services to IDPs, upscale its educational activities from primary to secondary education in the camps, support NGOs to continue to render help to the IDPs among others.

Earlier, Mrs Ogunsiji said they were in the state to get more from the Governor on critical areas VSF should intervene in both short and long term so the organization does not just throw money at the problems confronting the IDPs.

She stated that the visit followed a request by Governor Ortom to the VSF for support to the IDPs, stressing that a visit to the camps has revealed to the team the unhealthy nature of the environment inhabited by the IDPs.

The VSF Chairperson noted that Benue as a critical stakeholder in the area of food security has seriously been affected by food production in the state and country at large and must be encouraged to overcome.