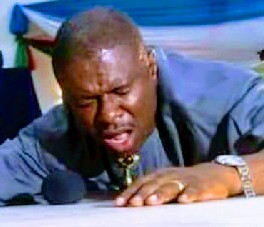 Our attention has been drawn to the latest epistle by Dakuku Peterside titled: “Wike’s Displacement Of .1m Rivers People Wicked, Evil, Inhuman -Dakuku Peterside… Plans To Convert Waterfront To Personal Ownership”, and once again we are amazed by the kindergarten mischief and the usual spurious, illogical and unsubstantiated attention seeking allegations, which have become the hallmarks of his less than edifying public posts.

We are even more amused by the concerted effort and deliberate intent with which Dakuku Peterside continues to draw attention to his obviously unfortunate loss of memory and dislocated bearing, less than six years after the administration he served in, left Rivers State reeling and in doldrums, after they were roundly and comprehensively booted out in in 2015.

Dakuku’s latest bellyaching over the determined effort of the Rivers State Government to sanitize the waterfronts by removing all shanties and most especially, continue with its frontal and hugely successful war to rid Rivers State of dangerous criminals and undesirable elements who have transformed these Waterfronts into a den of thieves, flies in the face of rational analysis, especially by one who sees himself as a leadership expert.

Dakuku Peterside will not feign ignorance of the fact that the demolition of waterfronts to rid Rivers State of criminals did not start with Governor Nyesom Wike’s administration.

Infact, the Vanguard Newspaper, August 24, 2012, captured a particularly “wicked, evil and inhuman,” (to borrow Peterside’s choice of words), thus: “On Tuesday and Wednesday, June 26 and 27, 2012, the government of Rivers State mobilized some earth-moving equipment to Abonnema Wharf to demolish all houses and destroy property, thereby rendering a community of about 10,000 people homeless. Men, women, children were under heavy rain with their property.

“This act of the Rivers State Government is inhuman, oppressive, heartless, and an abuse of right to shelter. Abonnema Wharf is one of the over 40 waterfronts communities scattered across Port Harcourt, the capital of Rivers State, which houses over 80 per cent of the city residents.

“The State Government has brandished the communities as nests of criminals that must be demolished. Governor Rotimi Amaechi claimed that the demolition is part of the urban renewal policy and also to check activities of criminally-minded individuals who use the water-fronts as operational bases.” Please note the date.

We are even at a loss to fathom how Dakuku Peterside could so quickly have forgotten that his APC govt not only demolished Abonnema Water front, but also Njemanze, Elechi Beach and Nanka waterfronts.

Dakuku Peterside even went ahead in his puerile epistle to state shamelessly that: “shelter was a right and fundamental to the welfare, survival and health of man and Governor Wike’s action against the waterfront residents is against all Universal Laws and Conventions on Human Rights and Habitation, including the United Nations Human Settlement Programme, UN-Habitat, United Nations Housing Rights Programme, UNHRP, the 1948 Universal Declaration on Human Rights, the 1966 International Covenant on Economic, Social and Cultural Rights and Nigeria’s Policy on Housing”; as if these organizations and statutes did not exist in 2012 when his administration was destroying Abonnema Wharf waterfront and all the others.

Of course nobody accussed the then Governor of plans to convert those Waterfronts to personal use, so why is Dakuku Peterside now speaking from both sides of his mouth? This hypocrisy by Dakuku and his ilk is simply getting too much.

To set the records straight, Governor Nyesom Wike, in his New year 2022 message to Rivers People, stated clearly, amongst other far reaching measures to curtail the activities of criminals in the state, that: “Indeed, there is no denying the fact that crime and criminality have been at very low rates in Rivers State and citizens felt safer and more secure in 2021 than the previous years.

“With the cooperation of the security agencies we identified and destroyed most of the shanties that hitherto served as safe havens and hideouts for criminals, who have now been dislodged and dislocated from the State having lost the space and capacity from which they could operate with ease.

“To consolidate on the gains of the dislodgement and dislocation exercises, and make the State even safer and more secure, we have decided to demolish all shanties and makeshift structures in identified crime hotspots in Port Harcourt Township and the Illoabuchi areas of Diobu from the second week of January 2022.”

Rivers people will recall even, that in August 2015, the Rivers State Government signed into law, the Anti-kidnapping bill, which was later amended in 2018, and from which the authority to move in and destroy everything that aids and promotes criminality in the State, including residences and hideouts, is derived.

Subsequently, a robust and determined action plan has been deployed to destroy criminal hideouts, shanties and makeshift structures located in notoriously infiltrated areas along Elele to Ahoada expanse of the East-West Road, Onne, Eleme and other flashpoint areas.

Of course, nobody accussed the Governor at that time, of plans to convert these areas to personal ownership, but now that Government’s efforts have yielded tremendous success, to the point that even criminals were already coming to terms with the reality that Rivers State was too hot for them, the detractors have come up with another misleading slant and narrative to bad mouth the pragmatic, focused and unrelenting actions of Governor Wike in ridding the state of criminals and maitaining the sustainable peace and security which the state is enjoying presently.

We must stress categorically here that Governor Wike is not one to play to the gallery or engage in deceitful, populist grandstading where important issues are concerned.

He has always believed firmly in the principle that whatever is worth doing at all in the interest and welfare of the people, is worth doing well and that is why he will go to great lengths and most times with admirable courage and fearlesssness, no matter whose ox is gored, to ensure that the right thing is not only done, but is seen to be done practically.

Governor Nyesom Wike is far bigger than what people like Dakuku Peterside will say and no amount of distraction by those who cry crocodile tears over the action to dislodge criminals from the state and have refused to remove the log in their own eyes for political reasons, will deter or dissuade him from his avowed commitment to deliver quality, functional and result oriented leadership and governance to Rivers people.

Nsirim is the Commissioner for Information and Communications, Rivers State