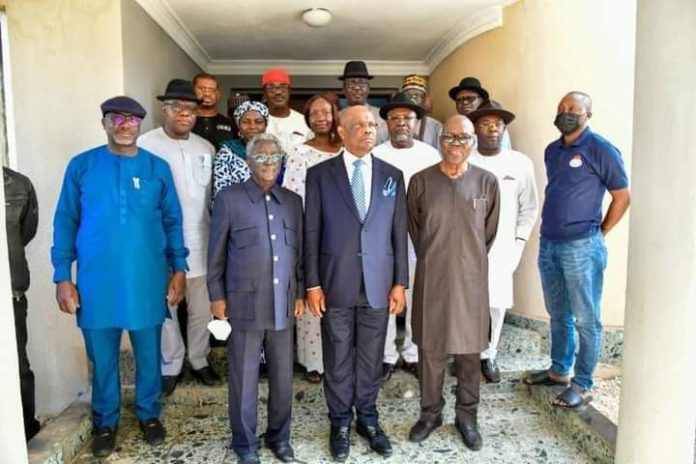 Governor Wike, who met with the two Peoples Democratic Party, PDP, leaders in Jos, Plateau State capital on Wednesday, said his reconciliatory visit was necessary if the party is to reclaim State governorship position and defeat the All Progressives Congress in 2023 general election.

The Rivers State governor during the meeting which took place at the residence of Senator Useni, explained that his visit was necessitated by friction that had existed between the two leaders. And he noted that if the friction is not urgently resolved, it would affect the success of the party in future.

“I do know that there will be by-election at the federal constituency and state constituency, and then again we are talking about the gubernatorial and national election next year. If the party is not united, no matter how bad APC is, there is no way we can win .”

He further continued: “And so, for me personal sacrifices can be made if you’ve fought wars for this country for the unity of Nigeria and today Nigeria is bleeding, not only Nigeria is bleeding , Plateau too is bleeding. I have no apology to say that the people of Plateau State are waiting for you both to put the party together and then you will just take back Plateau State. Plateau state is a natural PDP state.”

Governor Wike stated that it will be a disservice to the people of Plateau if the two leaders allow the APC to remain in power because of small disagreement between them. He therefore urged them to set aside their political difference in the interest of the party.

The Rivers State governor implored both Jang and Senator Useni to make personal sacrifices to move the party forward not only in Plateau State, but in Nigeria at large. According to him, the unity of the party is key at this crucial moment because APC moles within the PDP are trying to sow seed of discords.

Governor Wike explained that rebuilding the party is what is most paramount to concerned members of the PDP who want the party to return to power at the centre and retake majority of the States in the country.

“If the party is united, then we are sure of coasting home in 2023, and not just the national election, also Plateau State, knowing fully well that Plateau is a PDP state but somehow we are no longer in power in Plateau State.”

After a close door meeting with the two PDP leaders, Governor Wike announced that they have agreed to set aside their difference and work together.

Governor Wike also took a swipe the ruling APC and declared that Nigerians who are already disenchanted with the pervading hunger in the land, insecurity and growing adject poverty are anxiously waiting for the PDP to return to power and rescue the nation. And for this reason, he urged PDP members to unite in order to successfully wrest power from the APC.

He further disclosed that following the intervention of Governor Wike, himself and Senator Useni have agreed to work together in the interest of the party.

“We have agreed to work together to ensure the unity of PDP on the Plateau and ensure victory in 2023 election, not only governorship, all other elections, Federal or state. We want PDP to take its rightful position again on the Plateau and this is what we are going to work on. We want to thank His Excellency for coming to talk to us and we have agreed that we will continue from here.”

On his part, Senator Useni commended Governor Wike for finding time to come to Jos on a reconciliatory visit. He assured the governor that himself his former state governor will henceforth forge a common alliance in the interest of the party.

He disclosed that he has been following the developmental stride of the Rivers State governor and urged other governors to emulate him.