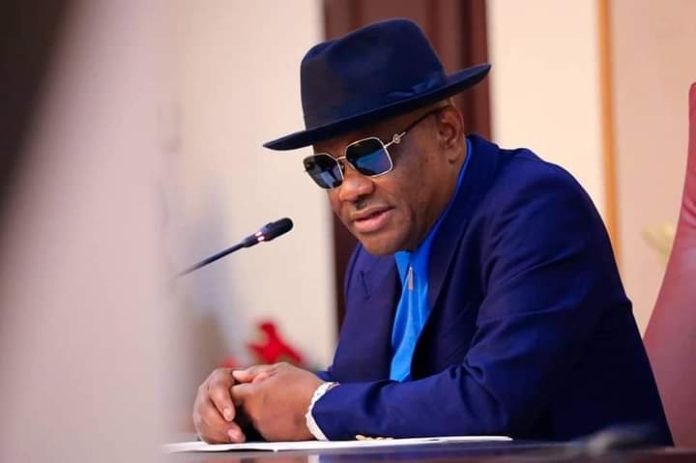 Rivers State Governor, Nyesom Ezenwo Wike says, as a responsible government, even if his political party; Peoples Democratic Party (PDP) is in opposition, his administration will not allow any act of economy sabotage such as crude oil theft take place in the State.

Governor Wike said the war against illegal refining of crude oil is not about political party but about Nigeria and its survival. He stated that it is also about ensuring that the health of Rivers people is not endangered.

The Rivers State Governor made the assertion during a security meeting he had with heads of security agencies in the State and five Local Government Chairman at Government House in Port Harcourt on Friday.

“The mere fact that I am in opposition does not mean that I have to sabotage the economy of the nation. This country belongs to all of us and you know that oil is the major source of revenue for the federation that the three tiers of government share from.

“So, you cannot, because you’re of the opposition, close your eyes and allow that to happen. No responsible government does that. This is not about party. It is about Nigeria. It is about making sure this country survives and then also the health factor.

“We must continue to take this war very seriously. Not only because it is sabotage to the national economy but also for the health of our people, which, for me, is the key why we must fight against this sabotage.”

Governor Wike commended the security agencies and some chairmen of councils who have shown seriousness in the fight against operators of illegal crude oil refineries in the state.

He, however, urged them not to rest on their oars because the fight is far from over, especially with such commitment to save Rivers people and all residents of the likely ailment soot causes.

“So, let’s take this as war that we must save our people. And we must save our nation. I commend you so far, for the efforts. But we must redouble our efforts and not to give any chances to these armed robbers that they called bunkers.

Governor Wike explained that the list bearing the names of those selected to be part of the taskforce against illegal refining activities has been sent to the Department of State Services(DSS) for profiling.

According to him, the prospective members are drawn from councils areas where their chairmen have shown commitment to the fight.

Governor Wike urged the DSS to be dutiful and attend to it quickly so that those who scaled can be assigned their responsibilities.

“It is important that when you profile them, you do it quickly too so that they can start work. Those in whom we have no trust, we remove them.”

Speaking further, Governor Wike said he has approved the money that was pledged to councils that have identified and destroyed sites used for illegal crude oil refining.

He clarified that only five local government areas have satisfied the conditions to get the fund.

“I will not give a Local Government money that I have not seen any commitment. No, I won’t do that. I want to see commitment. So, it is only those that have shown commitment that I have approved the money for.”