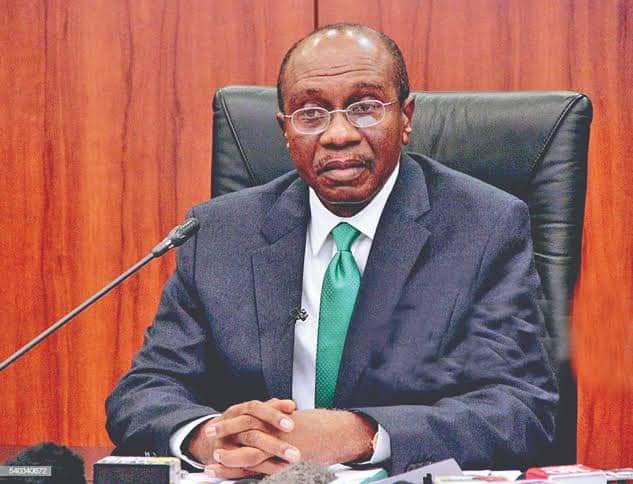 A youth-based civil society group, Patriotic Front of Nigeria (PFN), has called on members of the National Assembly, to as a matter of urgent public importance, investigate alleged cases of financial misappropriation against the Governor of Central Bank of Nigeria (CBN), Mr. Godwin Emefiele.

Emefiele, the group alleged, had used the many CBN’s intervention funds for Nigerians in the post COVID-19 era and other resources of the apex bank, to service his political associates and for his 2023 presidential ambition.

The PFN, in a statement signed by the Convener, Comrade Tope Badmus and made available to newsmen Monday morning, alleged that Emefiele was consulting to contest Nigeria’s President under the Peoples Democratic Party (PDP).

The group also advised the CBN Governor to “immediately resign” his appointment, so as to protect the image, integrity and sanctity of the apex bank, which should be known for political neutrality and professionalism.

“The Patriotic Front of Nigeria (PFN) has watched with growing concern, the ongoing activities to actualize the presidential ambition of the Governor of the Central Bank of Nigeria (CBN), Mr. Godwin Emefiele, in view of the inherent abuse that has seen him divert CBN’s resources in pursuit of his personal agenda.

“In recent weeks, Emefiele has personalized the apex bank’s resources for organizing political rallies and for questionable donations to political activities that have no bearing on the CBN’s role as a regulator of the financial sector.

“It is most unfortunate that the CBN Governor is now doling out CBN’s funds to political jobbers that are organizing campaigns or other events for him. The practice increased because Mr. Emefiele continues to oblige such requests. While this trend was initially perplexing, it is now clear that Mr. Emefiele’s unethical handling of CBN’s resources is directly linked to his political agenda.

“In addition to this unethical behaviour, all the intervention programmes of the CBN under Mr. Emefiele are conduits for funneling public recourses to politicians, especially in the north, who he is banking on for support. These Emefiele’s political associates in turn use the funds given in guise of loans to service their political careers by allocating such interventions to their political underlings.

“Laudable programmes that were intended to provide succor to Nigerians and strengthen the economy were hijacked for political patronage by the CBN Governor, who should have been ensuring neutrality in the administration of these programmes.

“In view of the foregoing and the worsening performance of the naira under his watch, PFN hereby calls on Mr. Godwin Emefiele to toe the path of honour by immediately resigning as the Governor of CBN to pursue his political ambition. He cannot continue to imperil the economy with his politicization of an organization that is programmed to run on neutrality and professionalism.

“Also, we demand that the Senate and the House of Representatives investigate Mr. Emefiele’s tenure as CBN Governor to establish the extent to which the institution was converted into the finance department of his presidential campaign organization. The National Assembly must do the needful to succeed in this investigation”, the group said.

According to the group, “the real tragedy is that Nigeria’s economy has taken hits after hits while Mr. Emefiele focuses on his political sojourn, which he reportedly plans to actualize on the platform of the People Democratic Party (PDP). He has practically abandoned the actual running of the CBN to his pals in the Bankers Committee, which has effectively left economic decisions in the hand of commercial banks that the CBN is meant to regulate”.

The PFN specifically asserted that, “the call from the Green Alliance for Mr. Emefiele to contest for President in 2023 elections is the final proof that his continued stay in his current position no longer serves the CBN’s interest, neither does it portend well for Nigeria and Nigerians. He will now increase the use of CBN resources for organizing his presidential political rallies, which is not good for the economy”.

Aso Rock: Why I don’t think the Buhari is from Sudan...

Ikpeazu intervenes as Work resumes on the 300 bed Spaces capacity...