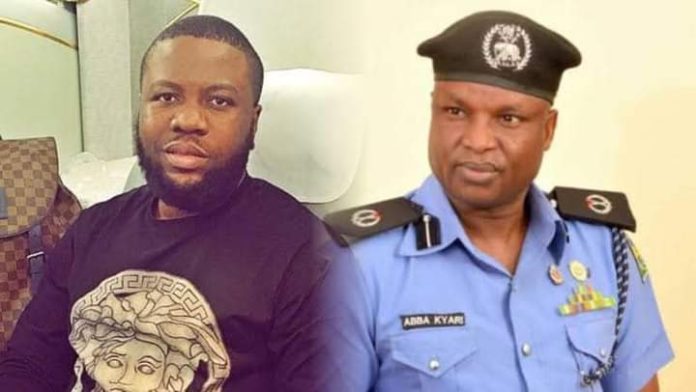 Following the rejection and the return of the investigation report of the Special Investigation Panel which investigated suspended Commander of IRT, DCP  Abba Kyari in the $1.1million Hushpuppi internet fraud scam and subsequent directive by the Police Service Commission to the Force headquarters to conduct a fresh investigation, it has emerged that the DIG Joseph Egbuniike  panel recommended the demotion of Abba Kyari to the rank of Assistant Commissioner of Police.

This is just as the panel found him culpable of fraternizing  with fraudulent characters, thereby violating the NPF professional ethics.

Aside this, the SIP found him culpable of violation of the social media policy of the Nigeria Police Force, for responding to the FBI’s indictment on his Facebook page without recourse to laid down procedures, though he (Kyari) later yanked off the social media response.

On the bribe, allegedly given to Kyari, the SIP said “the evidence of bribe is circumstantial since it was not proven that the bribe was paid into the officer’s account nor was any proceeds of the bribe traced by the panel much less linking the officer to any such proceeds.’’

It will be recalled that the office of the Attorney General of the federation in his legal advice of the Police report, disclosed that a prama facie case of fraudulent involvement was established against Abba Kyari but that the report was watery and can not be used in court to nail him.

The AGF office advice said, “That there exists a prima facie case of conspiracy, collaboration, receipt, conversion, transfer and/or retention of proceeds of unlawful activities contrary to the provision of Section 15, 17 & 18 of the Money Laundering (Prohibition) Act, 2004 and Section 17 of the Economic and Financial Crimes Commission (Est) Act, Cap EI Laws of the Federation of Nigeria, 2004 against DCP Abba Kyari and other suspects in view of the overwhelming evidence showing the nature of his disguised financial transactions and activities Ramon Abbas (Hushpuppi) and others.

A senior Police source further disclosed that the force has began further investigations into Kyari’s alleged involvement/links in money laundering deals of gangs as directed by the Attorney General of the Federation, Mr. Abubakar Malami.

7th Abia Assembly, Disciple in the Fight Against Discrimination of People...