Home FEATURED We Will Fish Out Those Who Attacked The Cattle Market At UKWA... 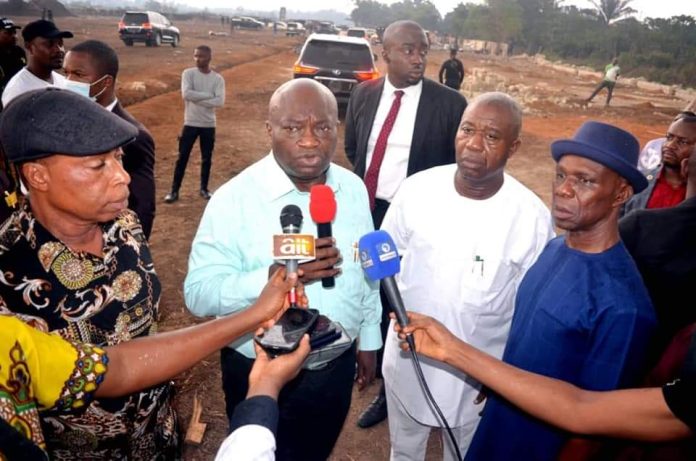 Governor Okezie Ikpeazu says investigation is on going to fish out those who carried out the attack on traders at the new Cattle Market/Abbatoir at Omuma Uzo, Ukwa West LGA.

Governor Ikpeazu, who disclosed this today when he visited the area for an on the spot assessment of the Cattle Market and Abattoir where yet to be identified hoodlums carried out an attack two days ago, said that the State Government has the capacity to protect the lives and property of people and residents of the State. He disclosed that preliminary investigations show that the dastardly act was not carried out by the youths of the immediate community as investigations revealed that the youths were the ones that assisted the victims after the attack.

Governor Ikpeazu assured that the investigation will be deep and all those involved would be identified and dealt with according to the laws of the land. He further informed that government is not going back with the decision of locating the market there but would fortify security there by citing a military base and other security units in the area as well as reinforcing the perimeter fencing around the new market and abattoir. He promised that his government will do all forestall such incident in future.

Governor Ikpeazu, who regretted that our society still has blood thirsty people who can kill mindlessly, sympathized with the victims and assured that government would continue to find a way to provide succour to those who lost their property to enable them continue with their business. He further said that he will meet with key stakeholders from the area this weekend on the issue.

The Governor was accompanied on the visit by the Member representing Ukwa West State Constituency in the State House of Assembly, Hon.Godwin Adiele, Executive Chairman of Ukwa West LGA Chairman, Hon. Okey Kanu, Honorable Commissioner for Homeland Security, Hon Sopuruchi Bekee, his counterpart in the Ministry of Petroleum, Chief Eze Nwanganga amongst other dignitaries.