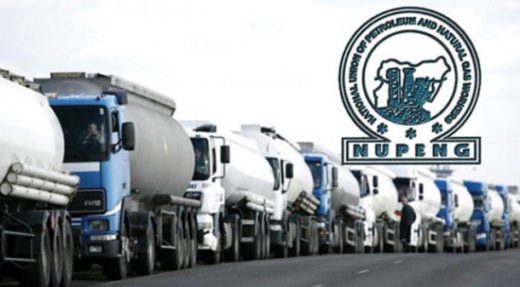 On Thursday the Nigerian Association of Road Transport Owners, National Union of Petroleum and Natural Gas Workers (NUPENG) and Petroleum Tanker Drivers (PTD) have suspended their planned strike after an intervention by the NNPC Ltd.

The suspension notice was made known in a communique following a critical stakeholders’ engagement between the NNPC Ltd., the Nigerian Midstream and Downstream Petroleum Regulatory Authority (NMDPRA), PTD, NARTO, and NUPENG in Abuja.

NUPENG and PTD had declared to embark on strike based on its investigations which revealed that officials of the Federal Ministry of Works and Housing were currently diverting the fund provided by NNPC Limited for the rehabilitation of 21 critical highways.

On Road Rehabilitation, the communique said NNPC provided updates on the current status of the road construction and rehabilitation projects under the road infrastructure tax credit scheme.

It said the NNPC assured the stakeholders that the funding earmarked for the 21 critical roads would be applied for the intended purpose only.

”To allay the fears of the stakeholders, NNPC and all parties commit to working together in the monitoring of the road projects,” it stated.

On review of freight rate for transporters, the communique noted that the stakeholders requested for completion of the ongoing discussion on the review of the freight rates to cover operational costs.

It noted that the stakeholders highlighted the precarious situation that truck owners faced in the light of current economic realities.

It further stated that the NMDPRA informed the meeting that a committee was constituted to review the rates which included PTD, NARTO and NUPENG in addition to other stakeholders.

It said all parties agreed to work expeditiously towards concluding the review of the freight rate and make recommendations to the Government.

According to the communique, the authority is to advise on definite close-out date during the week of Feb. 21.

”All parties agreed to work closely to ensure efficient distribution of petroleum products across the country,” it stated.