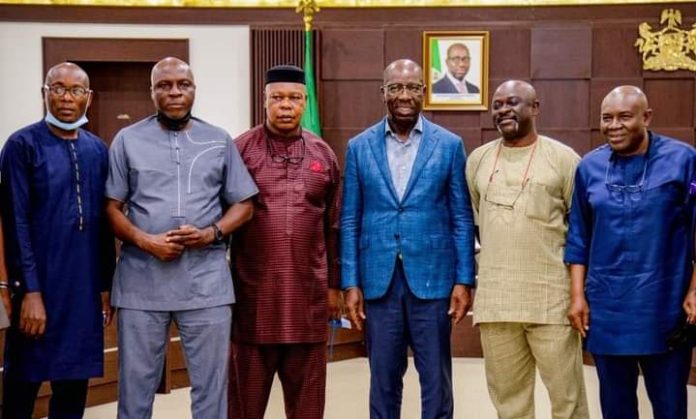 The Edo State Governor Godwin Obaseki has been named Governor of the Year 2021 by the Board of Editors of Vanguard Newspapers Limited for his sterling leadership acumen and the government’s developmental strides across all sectors of the state.

Receiving the letter of notification from the Newspaper’s Deputy Editor, Adekunle Adekoya, at the Government House, Benin City, Obaseki said his administration will continue to prioritize the infrastructural and human capital development in the state.

Obaseki said, “This selection came to me as a shock because I never saw Vanguard Newspapers as a friendly newspaper to my administration. We have evidence of this fact.

“The stories that were put out in the run-off to my reelection were not fair and didn’t reflect the true happenings, particularly the political stories.

“For the newspaper that I didn’t see as one of my friendly newspapers giving me an award, they obviously have done their work to select me.”

He continued: “For us, we are not an award-seeking administration as the greatest award we have ever gotten is from God and the people during the reelection in 2020. If you are reading newspapers across the country, we never had the opportunity for reelection but God made it possible.

“We are doing all to develop the state and make life better for Edo people using education which is one of our cardinal focus.

Earlier, Adekoya said the visit was to present a letter notifying the governor of his award as the Governor of the Year 2021.

“We looked at the Make Edo Great Again (MEGA) Agenda and have been on the ground to take a tour of developmental projects in the State.”

The award ceremony is scheduled to take place in Lagos on March 25, 2022.