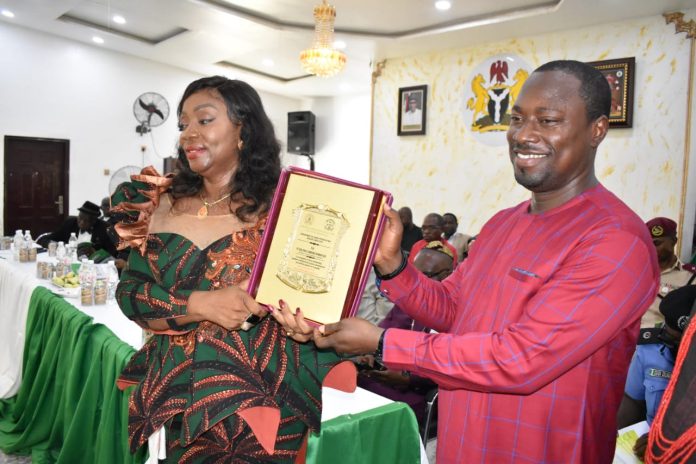 The Speaker of Abia State House of Assembly, Rt Hon Engr Chinedum Enyinnaya Orji was earlier today decorated with the highest honor of the War Against Indiscipline (WAI) Brigade in an event organised by the National Orientation Agency (NOA) in conjunction with the Abia State Ministry of Information and Strategy.

The event featured keynote address from critical stakeholders, Investiture of other WAI Brigade Patrons and unveiling of the new ‘Abia Mobilizer’, a quarterly magazine of the National Orientation Agency, Abia State.

Speaking at the programme which held at the Dr Michael Okpara Auditorium, Umuahia, the Speaker said he was particularly delighted to be considered for the investiture with the highest honor of the WAI Brigade which he described as an outfit through which discipline in every area of national life can be instilled.

The Speaker who was ably represented by Hon Stanley Nwabuisi, Member representing Ikwuano State Constituency at the Abia State House of Assembly, said the honour was a morale booster for him.

He stressed that in this era of insecurity, violence and other forms of social vices, the role of the WAI Brigade in civil intelligence gathering could not be overemphasised.

The Speaker also said that WAI Brigade members across the country should be encouraged to redouble their vigilance in the local governments, the wards and their various villages in order to contribute their quota towards building a disciplined and secure society.

While commending the zeal and patriotism exhibited by members of the voluntary outfit and enjoining them to be proactive in the discharge of their duties, the Speaker promised to support all the activities of the WAI Brigade in the State.

Hon Stanley Nwabuisi had earlier inspected the Guard of Honour mounted for him by men and officers of the WAI Brigade.