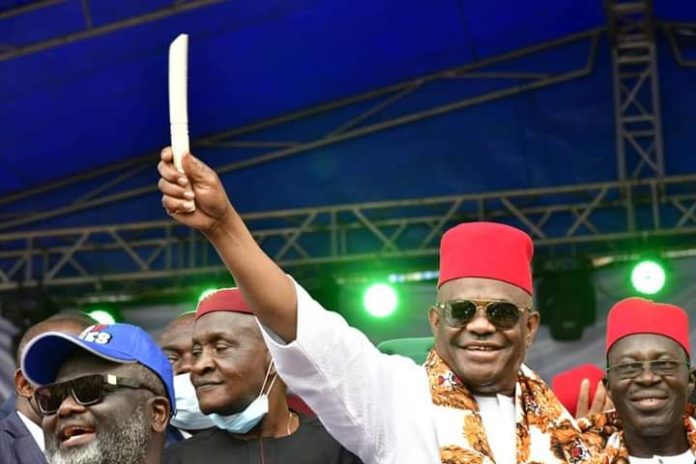 Rivers State Governor, Nyesom Ezenwo Wike has mocked the All Progressives Congress (APC) for its inability to conduct its national convention.

The governor said a party that cannot organise its convention should be viewed as inept in administering the country.

The governor stated that such inability as shown by the APC is another proof for Nigerians to use in denying the APC any place of governance both at the federal level and in any State of the federation in 2023.

“Nigerians are angry because the party (APC) at the national level is a failure. It’s a failure to the point that they are ruling Nigeria with tension. Ordinarily to sign the Electoral Act, they keep on postponing it everyday and Nigerians are tired.

Governor Wike enjoined members of the PDP in Imo State not to succumb to any form of intimidation against them by any party.

He said the days of such intimidation are gone and urged them to forge a common front because there has to be a party before election is won.

Governor Wike emphasised that one of the reasons of him being at the reception was to tell them of the need for PDP to strategise and reclaim the governorship of Imo State because the sitting governor has failed already.

“The only mistake that we will make to allow the man to come back is for
us not to work together, and we will not make that mistake.

“Let nobody fear, nobody can intimidate us. Can you be intimidated? All that time has passed when somebody that carried fourth will come first. It will never happen again.

Chairman of the Peoples Democratic Party (PDP) Board of Trustees (BOT),
Senator Walid Jubril acknowledged the tremendous work done by the leaders of the party to ensure it waxes stronger.

Senator Jubril said members of BoT are in support of what the Governors and the National Working Committee (NWC) are doing as they galvanize all party faithful and Nigerians in the mission of rescuing the country.

PDP National Chairman, Senator Iyorchia Ayu led members of the NWC to the event where they were all decorated with ensemble of the party.

Ikpeazu salutes Ochendo on his birthday