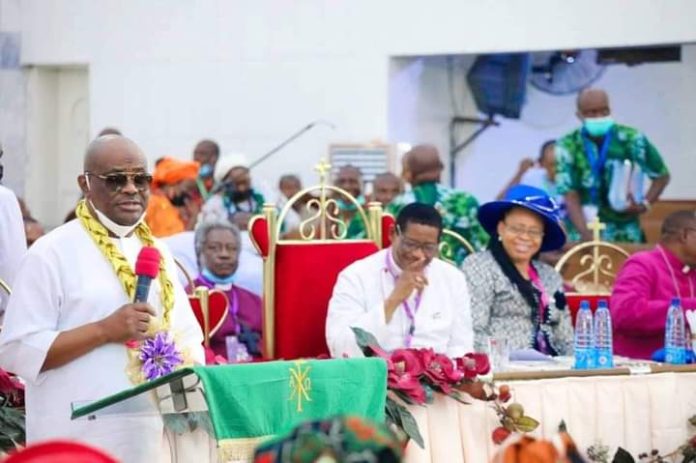 Rivers State Governor, Gov Nyesom Ezenwo Wike – CON has urged the Church of Nigeria, Anglican Communion to use their numerical strength to determine the enthronement of good political leadership in Nigeria.

The Governor said while the church cannot jettison the place of prayers, it should be combined with actual encouragement of the members to be involved in all political processes that include voting and being voted for.

Governor Wike gave the charge at the formal opening of the February Meetings of the Church of Nigeria (Anglican Communion) Standing Committee of the Mothers’ Union Executive at St. Andrew’s Anglican Church in Rumuobiokani of Obio/Akpor Local Government Area of Rivers State on Wednesday.

The Governor said it is scriptural that the people truly rejoices when a nation is ruled by good people.

Accordingly, he stated, that the Church bears divine obligation for such good leadership over Nigeria to be realized, which is through active and effective engagement in the nation’s political process.

“There are churches that claim tens of millions of registered members with branches everywhere, yet these numbers are not available in votes during crucial national elections.

“If the Church doesn’t like what is happening to Nigeria; the ravaging insecurity, the lack of meaningful development; the mass poverty; the unending economic pains on ordinary Nigerians; the recurring violent conflicts and recriminations; the violence on women and children; the discrimination and widespread social, economic and political injustices and the general lack of hope and direction;

“Then, it must start to mobilize its members and Nigerians in general to join and actively participate in the political process to bring about the genuine and sustainable change that the our country so urgently needs.”

Governor Wike insisted that what will change Nigeria for the better is good governance which comes with good leadership actuated from and by the will of the people through credible elections.

Governor Wike pointed out that good leaders are problem-solvers not problem-compounders. He said only good leaders can resolve the country’s perennial economic, social, and security challenges.

“Good leaders respect the rule of law, places the common interest above self, are fair to all sections of the society and promotes social cohesion by giving everyone or section a true sense of belonging.

“Good leaders prioritize the security and wellbeing of the people through sound economic policies and refrain from juggling politics and development to the detriment of the nation.

“Good leaders would work with the legislature to strengthen the State institutions, promote human rights and ensure an independent judicial system.

“A Good leader will readily sign the amended Electoral Bill into law to guarantee a fraud-proof and credible electoral system for the country so that citizens can freely and fairly elect their leaders and hold them accountable.”

Governor Wike restated the commitment of his administration to serving Rivers people and all residents in the state with the best of ability in delivering the best that can be provided.

He said the purpose of his administration is to serve God through service to the people as an expression of gratitude of the love and protection enjoyed from God including the sustained prayers from the church.

“Thankfully, we have consistently discharged our responsibilities with the fear of God and with a resolute conviction to be as fair as possible, to do what is right before God and man and to ensure that the benefit of progress is spread to all parts of the State.

“Although we may not have achieved all that we set out to do; neither have we been able to meet all the wishes and expectations of every citizen, which as you know, is rather impossible.

“But no one can deny the fact that we have blazed the trail with our transformation agenda and achieved expansive progress for our State, our people and our country.”

Governor said his transformational agenda, from the rule of law, judicial independence to human security and the provision of socio-economic infrastructure, including quality roads, bridges, flyovers, education, healthcare delivery and rural development has been expansive in content and extensive in delivery and impact.

Which is why, he stated, his administration is profoundly thankful to God Almighty not only for entrusting his team with the rare opportunity to work for the progress of Rivers State but also for the wonderful achievements secured.

The Governor donated the sum of N300 million to support the Anglican church of Nigeria.

Delivering his primate’s address, Archbishop, Metropolitan and Primate of all Nigeria (Anglican Communion), Most Rev. Henry Ndukuba noted the need for courageous, empathic and caring leaders to rise over Nigeria to steer its affairs.

Such demand, he said has become imperative because of the excruciating economic hardship caused by unfriendly economic policies, and endemic corruption that has destroyed all public institutions.

“The removal of subsidies at this time would portend untold hardship for millions of Nigerians especially those in the middle and low-income brackets. It will surely drive up the cost of fuel, which will lead to an increase in transportation fares, increased inflation rates, reduced purchasing power and a surge in poverty.

“Subsidy removal in our view will throw more Nigerians below the poverty line and further reinforce our unenviable status of being the poverty capital or the
World.”

Most Rev. Ndukuba also advised against further borrowing. He urged the Federal Government to heed to the advise by the Monetary Policy Committee to seek alternative, more viable and efficient infrastructure-financing sources that will help ease the expenditure burden on the county.

The primate said Nigeria needs a new civilian and democratic constitution made by sovereign representation of the ethnic nationalities in order to address the fundamental issues that have hampered national growth, unity and prosperity.

“While we commend the National Assembly for their efforts to
review the present constitution, we are convinced that what we need is a totally civilian constitution made by a sovereign representation of the ethnic nationalities of this
country.

“This will address the fundament united and prosperous nation. We need a new citizens made national constitution and not the amendment of a military-formulated constitution.”

In his welcome address, the Archbishop of Niger Delta Province, Most. Rev. Blessings Enyindah harped on the need for Christians to strike a balance between their earthly and heavenly obligations so that none suffers.

Most. Rev. Enyindah noted that most Christians have focused so much on heaven and have lost their relevance to the earthly government, families, friends.

He said Christians must realise that they are also citizens of countries of the world and should assume their roles in the formulation and implementation of policies that shaped society.

A Note To Current And Aspiring Public Servants In Abia State:...