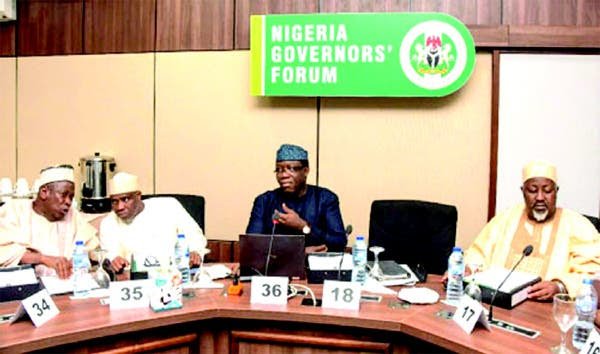 The Governors argued that the Bill as currently constituted works against the interest of the States as it seeks to re-establish as centrally controlled electricity sector.

Their position is contained in a letter by the Chairman of the Nigeria Governors’ Forum (NGF) Kayode Fayemi, addressed to the Chairman, Senate Committee on Power.

The NGF’s spokesman, Abdulrazaque Bello-Barkindo, in a statement on Monday, noted that Fayemi, the letter dated February 22, 2022 argued that the governors were averse to the Electricity Bill in the version currently before the Senate.

The governors argued that contrary to the views of the Chairman of the Senate Committee of Power, “Clause 2(2) of the Bill is rather injurious to the constitutional rights of states with regards to electricity generation, transmission, and distribution.

They added: “Limiting the powers of state governments to build generation plants, transmission and distribution lines only in areas not covered by the national grid, shrinks the powers of states to make laws for electricity within their state jurisdictions.”

The governors are of the view that it was  important for the Senate to engage the Federal House of Representatives on existing Bills on the electricity sector, particularly the Electricity Power Sector Reform Act (EPSRA) amendment bill 2020 and other bills, which also infringe on the constitutional rights of states to make laws for electricity, with a view to harmonising it into a single draft electricity bill.

The letter reads in part; “We write concerning a matter that has now become one requiring urgent national attention.

“It has come to the attention of the Nigeria Governors’ Forum (NGF) that the Senate of the Federal Republic of Nigeria has before it a Bill for a law to repeal the Electric Power Sector Reform Act, 2005, consolidate various laws relating to the electricity sector and for many other matters both connected and unconnected herewith.

“We wish to point out that “electricity” Is not an exclusive federal matter. It is guided by the provisions of the Concurrent Legislative List. Articles 13 and 14 clearly provide that the power to make laws for the generation and transmission of electricity are concurrent.

“We also wish to note that the National Electric Power Policy, 2001, the only extant Federal Government general policy statement on the electricity sector, in Chapter Three, is very clear that the States and State Governments are key stakeholders in the electricity value chain.

“We believe that the reality of the states as key partners in the achievement of universal electricity access by all Nigerians must not only be accepted by the Federal Government but must be legislated by the National Assembly.

“It would be unconstitutional and an unjustifiable act of overreach for the Senate to consider and pass a Bill that continues to treat the Federation as one single electricity jurisdiction or sector.

“While a single Electric Power Sector Reform Act may have been useful as a catalyst for the sector in the early years of the Fourth Republic, the states have all come of age, literally and metaphorically, and the arrangements must change in a way that accepts and respects the maturity of the states in electricity matters; a reality that this Senate Electricity Bill does not recognise and take account of, but at best, only pays the most cursory lip service.”

The governors noted that the Bill currently before the Senate does not address any of the challenges that threaten the sector and the nation, but rather, its key characteristics are a failure to recognise and provide for the rights of states to have their own electricity markets.

The added: “The re-establishment of the same single national electricity market that has brought neither growth in capacity nor socio-economic development for the nation and as stated earlier, the continued absence of a clear path for the market to exit permanently from its long-running insolvent status.

“The Bill also re-establishes the existing Federal Government entities and a number of other new ones as key players in the sector.

“Finally, perhaps the most egregious feature that runs throughout the Bill is the establishment of a single Federal Government appointee, the Minister of Power, as the de facto head and statutory supervisor of all the key FG electricity sector MDAs, including the Nigerian Electricity Regulatory Commission (NERC), in a supposedly privatised electricity sector.

“Interestingly, the Minister’s extensive powers over the sector are shared with the National Assembly through the mechanism of legislative oversight responsibilities.

“The Nigeria Governors’ Forum does not support this Electricity Bill in the version currently before the Senate, except these amendments are reflected.

“This is because it is unconstitutional and maintains the policy of Federal Government overreach in the electricity sector that has not yielded development to the country.

“We state in very clear terms that this Electricity Bill Is not a solution to the pressing challenges summarised above. It is also premature in that it does not follow from a comprehensive national dialogue on a completely revised national electricity policy.

“We doubt that a private member’s Billl such as this can deal with such a complex national security issue without the benefit of extensive research, analysis and prior consultation before a comprehensive Bill is drafted.

“We strongly recommend the constitution of a Working Group, spearheaded by the state Governors under the auspices of the National Economic Council (NEC), to work with the NASS leadership on the way forward for the electricity sector.

“From this should emerge a new National Electricity Policy and the foundations of a new Act of the National Assembly that, for the first time, will have the full buy-in of the states.

“Electricity is a vital matter of national security that, by virtue of the 1999 Constitution, is in the concurrent list and should, therefore, be made into law only with the collaboration and concurrence of the states of the Federation.

“We look forward to close collaboration between the NGF, the National Assembly and the Federal Executive Branch in charting a new and productive path towards bringing energy security to our county.”