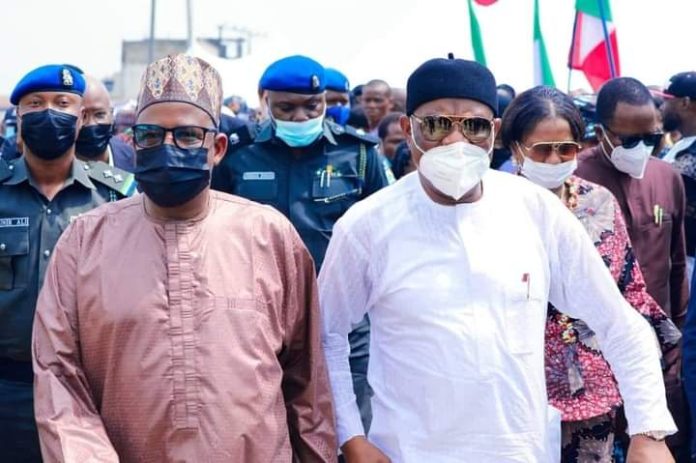 *As Wike insists availability of funds for projects awarded by him to avoid abandonment, term variation

The Bauchi State Governor, Bala Mohammed has expressed the need for Nigerians to consider giving Governor Nyesom Ezenwo Wike the opportunity to serve them at the national level.

He maintained that if Rivers State is lucky to have Wike, Nigerians will be luckier to have a man with the vision of knowing how to harness resources in improving the quality of life of the citizenry.

Governor Mohammed was speaking at the flag-off of construction work at the site of the Rumukwurushi-Elimgbu flyover in Obio/Akpor Local Government Area of Rivers State, on Monday.

Governor Mohammed said that he had disclosed his intention to run for the presidency, but he knows in accomplishing that goal, there are people that are of better quality considered to have such capacity to do much better.

“On behalf of everybody here, I want to say thank you to you because I wish you’ll be given the opportunity to bring this type of vision to the national level where you will be able to come and contribute your quota.”

The Bauchi State Governor said he felt humbled and honoured to flag-off the Rumukwurushi-Elimgbu flyover project, which is the 10th flyover that Governor Wike has provided for his people within his second tenure.

“Again, you can see the fidelity. The sincerity of purpose. I am not in my second term but I cannot remember any second term governor doing this kind of infrastructure, delivering to his people.

“He is not here for himself. I am not praising him. There is nothing that he will give me that I don’t have. But I really envy him for what he is. He is for his people.

“When some second term governors are busy preparing to go home, this man is even breaking new frontiers, doing new projects, and giving timelines and finances that will be able to be delivered during his tenure.”

Governor Mohammed said Governor Wike has distinguished himself as the new face of leadership in Nigeria. Such leadership style, according to him, has raised the bar of subnational leadership in the country, making it more attractive and a thing of pride to be associated with the Rivers State governor.

“Some of his templates that have really been implemented; some of them, you can touch them in terms of improving the quality of life of our people.

“We are copying from him because we don’t have to reinvent the wheel. He has done so much. He says the truth and does the right thing. You can see the conceptualization. The way and manner the projects were conceptualized and financed.”

Governor Mohammed noted that barely one year to the general elections, he can only imagine that a governor would love his people so much and continue to invest resources for the progress of their society and economy with new projects.

In his words, “That shows you that he wants to do so much and fulfil his promises. And that will spur me and encourage me to go back to Bauchi State and to still do more projects. Maybe, I will have the benefits of second term. But the time I have, I must use it very well.”

In his speech, Governor Nyesom Ezenwo Wike of Rivers State said his administration owes it as a duty to Rivers people to deliver social services and quality projects that will improve their living conditions.

He explained that the Rumukwurushi-Elimgbu Flyover is the 10th flyover and a part of his administration’s promise to the people. Governor Wike assured it will be delivered in the next 10 months because 80 percent of the contract sum has already been paid to Julius Berger Nigeria PLC.

“What is important in governance is when public officers or elected public officers make promise to their people, to the electorate, there must not be any excuse not to fulfil such promises.

Governor Wike stated that the Peoples Democratic Party (PDP) had remained consistent with his pact with the electorate unlike other parties that hardly can fulfil promises they make during electioneering period.

Particularly, Governor Wike said, such politicians who hardly keep promises hinge their confidence on hijacking of electoral materials to smuggle themselves into office.

But he said with President Mohammedu Buhari signing of the Electoral ACT Amendment into law, it means every politician will have to show evidence of service to elect support of the electorate.

According to him, the period of using soldiers and hired thugs to snatch and hijack electoral materials is gone because with the card reader and transmission of election result electronically, votes cannot be compromised.

“The Electoral Act that the president has appended his signature, the good thing there now is, operation show what you have done.

The governor reiterated that all projects started by his administration will be completed before he leaves office next year. He pointed out the reason why there exist several projects abandoned by the federal government is because such projects were merely conceptualised with the requisite financial backing.

“Part of the problem we have in this country is that when you conceptualise project or initiate a project there is no backup financially to make sure that project is taken to logical conclusion. That is why you see at the federal level, projects being awarded, the projects will not be completed in ten years time and at the end what you see is variation because of inflation, we say no, that will not be our strategy.

“All these key important projects that we have awarded will be backed up financially. We will not award any project where we don’t have the finance to back it up.”

Rivers State Commissioner for Works, Elloka Tasie-Amadi said the Rumukwurushi-Elimgbu flyover that is 8.40 meters long, and 17. 6 meters wide with median will be completed in 10 months.

When completed, he explained, it will enhance rapid development of real estate activities and boost commerce in the area.

The Managing Director of Julius Berger, Lars Richter, assured that the company will deliver the project on time and according to specification.

Earlier, the Rivers State government and Julius Berger had signed a contractual agreement for the Rumukwurushi-Elimgbu flyover at the Government House, Port Harcourt.