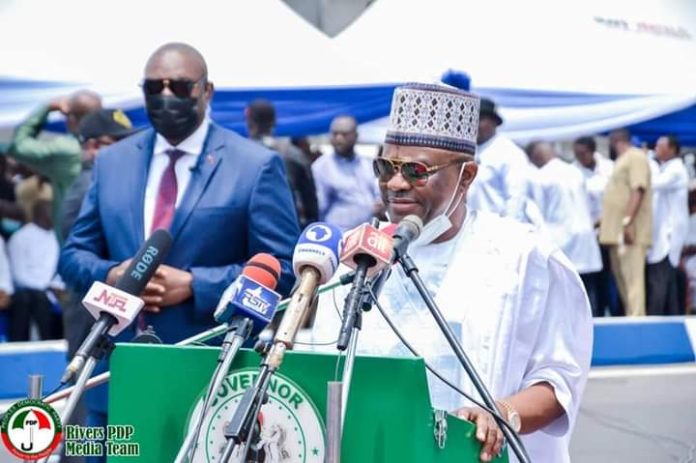 Rivers State Governor, Nyesom Ezenwo Wike has explained that his administration from the onset prioritised laying a solid foundation for the State through provision of quality social services and delivery of infrastructure that should engender socioeconomic growth.

Governor Wike said, that expected economic growth of the State has been secured as the infrastructure provided by his administration has been attracting more investors to the State.

The Rivers State governor gave the explanation at the inauguration of the Oro-Abali Flyover, at the Kaduna Street Junction along the Port Harcourt -Aba Expressway in Port Harcourt, on Tuesday.

He asserted that nobody can say that his administration has not delivered projects, improved the security situation and promoted peaceful coexistence within the State.

Having spent the better part of his administration in working to provide physical infrastructure, Governor Wike said, it is time he focused on the politics of welfare of the people.

“Now that we have done virtually everything we have promised Rivers people, this is the time now we have to play politics of stomach infrastructure.

“What people do not understand; people think when you are in government, from first day, you should be sharing money. I said, I won’t do that.

“I have to work for the people of the State. Now that we have worked, the remaining period will be to feed your stomach.”

Governor Wike said welfare is an important aspect of the politics of governance because it entails a form of empowerment of the people economically.

“There is time for everything. Now, the time has come. We have to start to empower our people. The empowerment is for those who have been patient.

“So, every local government, every community will have a pattern of how we are to empower our people.

“As a government, when there is unemployment, some people bring out what they called welfare scheme to be able to cushion the level of poverty in the society. That is what we are going to apply here.”

Governor Wike informed that his administration will dualised Iloabuchi Road that transverse Mile 1 and Mile 2 axis of Diobu in Port Harcourt.

He said there is expected heavy vehicular traffic flow to that road that necessitate its dualisation. According to him, the dualisation of the road will be about the last of the project his administration will deliver in the area before the end of his tenure.

Performing the inauguration of the Oro-Abali Flyover project, Bauchi state governor, Bala Mohammed said he is elated to commission yet another beautiful project of Governor Wike, delivered to address critical transportation problem in the area.

Governor Mohammed noted that it is second tenure for Governor Wike yet he is not relenting, but working seriously for his people because he has Nigeria in mind, on a broader scale.

“What he is doing in terms of urban renewal is something I can say is only comparable to what is in Abuja, the Capital Territory.

“The difference of this is that, this is being planned in a manner that is really judiciously using Rivers money without any burden of loan.

“There is a very clear achievable timeline and of course, with a very beautiful procurement process where the issues of increases, changing of timeline of delivering of the project is not there with 80 percent upfront payment being done.”

On his part, the Rivers State Commissioner of Works, Elloka Tasie-Amadi explained that Oro-Abali Flyover is an additional infrastructure provided by the Wike’s administration to solve vehicular traffic situation in Port Harcourt and its environs.

He said the dualised flyover will make commuting easier, support and promote commerce as well as serve as foundation for opportunities that will engender wealth creation.

The Managing Director of Julius Berger, Lars Richter, commended the Rivers State government for giving the company the opportunity to be part of the ongoing infrastructural transformation of the state.