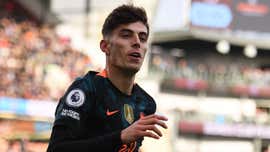 That’s three Premier League wins on the bounce for Chelsea, and they stay third, now six points ahead of Manchester United below them.

Next up for them is a trip to Norwich City. Burnley miss the chance to move out of the relegation zone, staying in 18th place, currently one point from safety.

They have Brentford next time out.

A brilliant second half from Chelsea sees them beat Burnley 4-0. The hosts had the better of the first-half chances, but Chelsea completely turned things around.

The win was secured with three goals in the first 10 minutes of the second half – James opened the scoring from a tight angle before Havertz got a quick double to put them out of sight.

Pulisic rounded it off in the 69th minute when Tarkowski’s attempted block bounced to him, and he poked it over the line.