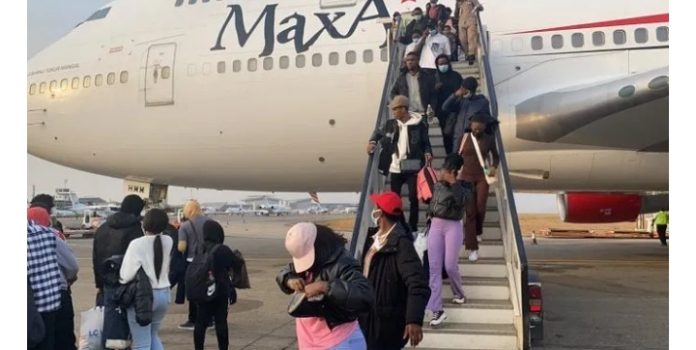 The second batch of Nigerian evacuees from Poland have arrived this evening in Abuja.

We have earlier reported how Nigeria Friday morning received the first batch of its citizens fleeing war-torn Ukraine. The returnees arrived from Romania where they had fled to following the war in Ukraine.

They arrived on a plane owned by Mar Air, one of the airlines billed to airlift Nigerians returning from Ukraine.

According to the Nigerian government, 415 evacuees arrived at the Nnamdi Azikiwe International Airport Abuja, from where they will depart to their various homes.

Nigeria’s foreign affairs ministry had announced that it expects to receive the first batch of evacuees from Ukraine on Thursday.

The federal government on Wednesday, approved $8.5 million for the evacuation of 5,000 stranded Nigerians.