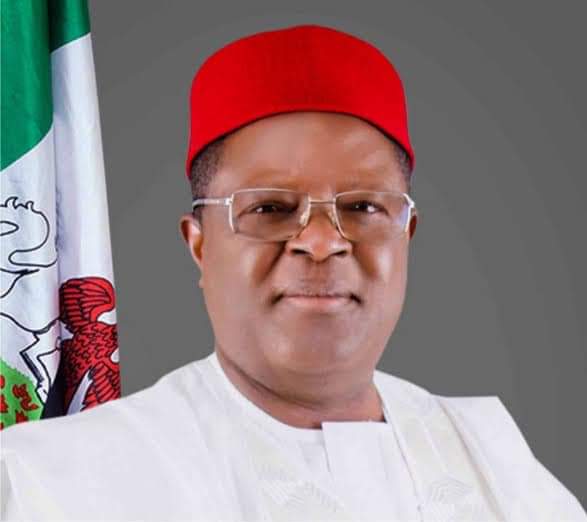 Governor David Umahi of Ebonyi State has disowned the judgment of the Justice of Justice Inyang Ekwo which allegedly ordered him and his Deputy to vacate their offices for defecting to the All Progressives Congress, APC, after being elected on the platform of the Peoples Democratic Party, PDP.

Speaking with newsmen in his office at the Ochoudo Centenary City Abakaliki on Tuesday, Governor Umahi faulted the judgment saying it did not reflect the provision of the Constitution of the Federal Republic of Nigeria as it concerns conditions for removal of Governor and Deputy from office.

“In the first place, there is no constitutional provisions for any hatchet man to remove a Governor.

“There are three ways whereby a Governor can vacate his seat, it is either by resignation, by death or by impeachment by the House of Assembly.

“There is no other Constitutional provision that empowers a hatchet man to turn the Constitution and the Law upside down.

“I have listened to the judgment of Ekwo and it is very obvious that he was on a mission, he was making all efforts to upturn the rulings of the Appeal Court and Supreme Court on issues like this.

“We have heard the rumours before now that he was determined to give judgment against all known laws and the constitution, first to embarrass APC, two to embarrass the Federal Government.”

Governor Umahi decried the compromise of integrity by the Judge as reflected in the Judgement and called on the Judge to rescue himself from other cases concerning Ebonyi State under his adjudication.

“I want you to disregard the Judgement, it is null and void, there is a subsisting judgment in Zamfara State and there is also a judgment in Ebonyi State, so we have chosen the one to obey, we will not obey his ruling, we will obey the ruling of a competent Court of equal level that says you cannot sue a Governor.”

While calling on the Judiciary to look inwards and restore itself as the last hope of a common man, Governor Umahi noted that he remains the Governor of Ebonyi State by every account of the law.

“The sections of the Constitution is very clear, no Civil or Criminal proceedings could be brought against a sitting Governor, this is not a pre-election matter, this is not a tribunal matter, so he has murdered justice in this country and he will be remembered and his generations for this jungle justice which has no leg to stand, I am still the Governor of Ebonyi State and he has no powers to remove me.

“But let me say to the Nation that there is need to look at the integrity of our Judiciary because if the Judiciary begins to rule against Constitutional matters that are well laid down, then the Citizens of this Country may decide not to obey such judgment and this is very important.

“So I want you to relax, my office is still my office, he is wasting his time and I believe very strongly that he was influenced and we have no confidence in all the cases of Ebonyi State that he is handling and we are asking the Chief Judge of the Federal High Court to transfer all the cases.

“So I want all my supporters to laugh over it and know that it is Judiciary on trial.

Governor Umahi also maintained that the Government would appeal the Judgement to set the record straight for Democracy.

“Of course, we will file an appeal against the useless Judgement even though the Supreme Court had ruled in the case of Atiku that there is no law that empowers the President to be removed on account of defection which is the same qualification for Governor.

“So it is just a jungle justice that is purchased and we know where it is coming from.

In the case of seventeen House of Assembly Members whose seats were also allegedly declared vacant, Governor Umahi said Justice Ekwo lacked the powers to do so as had been proven by the Court of Appeal and Supreme Court.

“Even in the case of House of Assembly Members, the Supreme Court and Appeal Court have ruled, to set the seat of a member aside, it has to done by the presiding officer of the House of Assembly or the National Assembly, so let me see the kind of judgment he is going to give also, he has been charged and he must discharge.”

Wike Has Developed Mother Of All Football Academies In Africa Says...