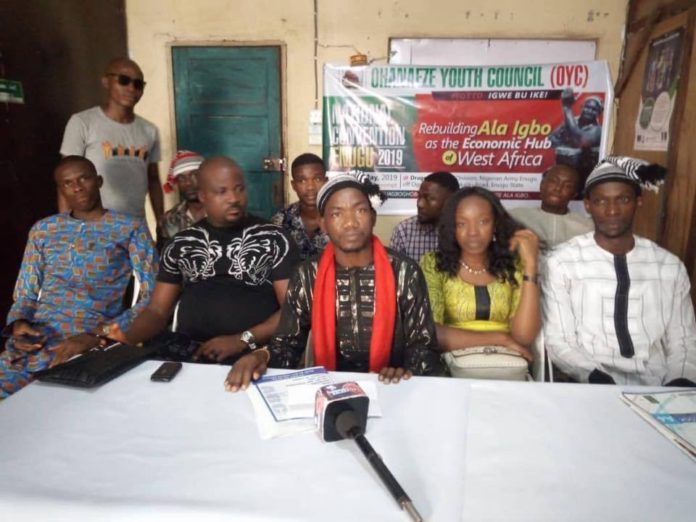 Ohanaeze issued the warning in a statement made available to newsmen by its President-General, Mazi Okwu Nnabuike.

He said it was regrettable that Umahi had turned the Ebubeagu security outfit into a terror gang, which is after opposition voices and people considered very critical of the government’s policies.

Okwu said the OYC had followed keenly recent happenings in Ebonyi State and came to the conclusion that the security outfit was not serving the interests of the people of the State but that of the governor.

“As advocates of peace and development in Igbo land, we want to express our displeasure over the happenings in Ebonyi State where the Governor, Chief David Umahi is doing everything to make sure that he cows everybody into submission.

“The Ebubeagu security outfit was supposed to provide security for the people but the reverse is the case as it has been turned into a tool for hunting opposing voices. Every day, there are tales of woes from Ebonyi State on how that group is being used to intimidate the poor masses as well as anyone who is critical of Umahi’s government.

“Even the media are not spared as we all read what happened to a journalist recently in the State. Members of the Ebonyi State House of Assembly are equally not spared of the harassment in Ebonyi.”

He noted that the likes of Umahi “has proved to Nigerians that State police would only be used by governors to intimidate and subject members of the opposition to cruel treatment.”

“We are saying that enough is enough. Gov. Umahi should emulate his Enugu counterpart as no one has ever heard that the Forest Guard, which is doing great a job in the State, has ever been unleashed on the opposition.

“We also urge the Abia State Government, which recently appointed a commander for Ebubeagu to ensure that the outfit is not politicized like that of Ebonyi,” Okwu added.

He said ensuring enduring security, peace and justice remained the priority of Igbo youths, adding that “this must be achieved without trampling on the rights of the good people of Igbo land.”