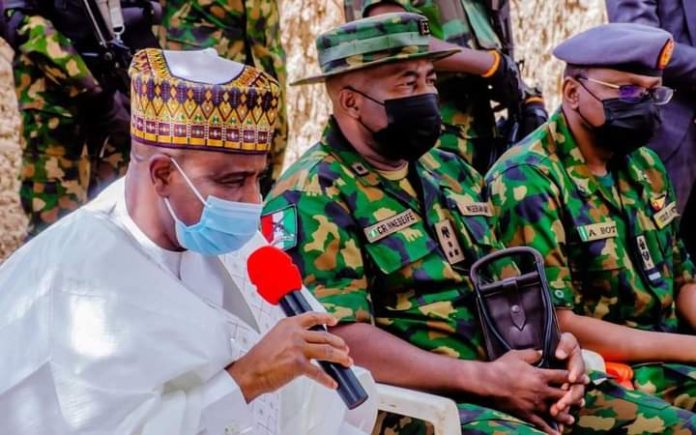 Gov. Aminu Waziri Tambuwal of Sokoto state on Wednesday warned marauders and their collaborators to stay clear of the state or they will face the full wrath of the law once apprehended.

Gov. Tambuwal, who cut short an official trip midnight Tuesday to address the reported influx of suspected bandits and their informants into the village of Sabon Garin Liman in Wurno local government area of the state, said his administration, with the assistance of security agencies and the Federal Government, will not allow criminals to roll back the gains being made to stem the tide of their nefarious activities.

He said the state government is not unaware “of what is happening in this village, where bandits, both from within and outside the country are taking refuge.”

“I was out of the state. I left Sokoto yesterday. I had to come back by 1 am last night because of certain information that I received that are very worrisome and of concern, that have to do with happenings around here and Gundumi forest (in Zamfara state).

“We know that there are informants in this village and they collaborate with bandits. We are going to flush them out and make sure that the law takes its course on them,” he reaffirmed.

He appealed to the law abiding people in the community to collaborate with the village head, other leaders and security agencies in the state; “particularly those deployed around this area so that we can nip this in the bud and reestablish peace here and in the state in general.”

He commiserated with the people of the community “on what has been happening around here, especially the recent attacks.”

Referring to what happened in Kebbi state where bandits killed over 60 vigilante men on Sunday evening, the Governor also extended condolences to the people and government of the state, while pointing out that “We don’t want such happenings. We must all work together to ensure that the progress being recorded so far is not retarded.

“We pray that God Almighty shall continue to forgive the souls of those who lost their lives; and grant complete healings to those who sustained injuries and wounds, and all of these,” he prayed.

The Governor was accompanied during the visit by heads of security agencies in the state, the state Commissioner of Security and Career Affairs and the Secretary to the State Government (SSG), Mallam Saidu Umar.

Also with the Governor we’re the Chairmen of Goronyo, Rabah and Wurno local government areas.

IGP Warns Police Officers Against Use Of Force On Peaceful Protesters