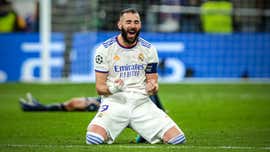 Kylian Mbappe was running riot at the Santiago Bernabeu but his fellow Frenchman struck three times in 17 minutes to propel the hosts to victory.

On Wednesday night, Paris Saint-Germain suffered another mind-blowing ‘remontada’, once again dumped out of the Champions League last 16 by a Spanish side from a position of utter dominance.

This time around, the aggregate lead over Real Madrid was just 2-0, rather than the four-goal advantage they arrived in Barcelona with in 2017, but this collapse was almost just as shocking.

Kylian Mbappe had decided the first leg at the Parc des Princes with a superb solo strike just before the full-time whistle and he struck again just before the break at the Santiago Bernabeu to put the Parisians in cruise control.

Indeed, another Mbappe goal appeared a formality, with the 23-year-old running rings around players who could well be his team-mates next season.

He looked to have killed the tie when he slotted home in the second half after an outrageous dummy on Thibaut Courtois, but his slick strike was correctly ruled out for offside.

And yet, by full-time, the only French forward the world was talking about was Real Madrid’s Karim Benzema.

A stunning hat-trick in under 17 minutes, the latter two goals coming in the space of just 106 seconds, turned the tie on its head and ignited the already-rocking Bernabeu.

Benzema’s first goal served to keep the tie alive, a defibrillator to Madrid’s dying hopes, and it was served up on a plate by PSG goalkeeper Gianluigi Donnarumma.

Under pressure from Benzema, the Italy international hesitated and played a suicidal pass across the face of his own goal straight to Vinicius Junior.

Ramos left out of Spain’s final squad for Euro 2020

How much COVID-19 pandemic cost football this year -FIFA reveals