Home PUO NEWS Wike To Umahi: Return PDP’s Mandate Back To Us 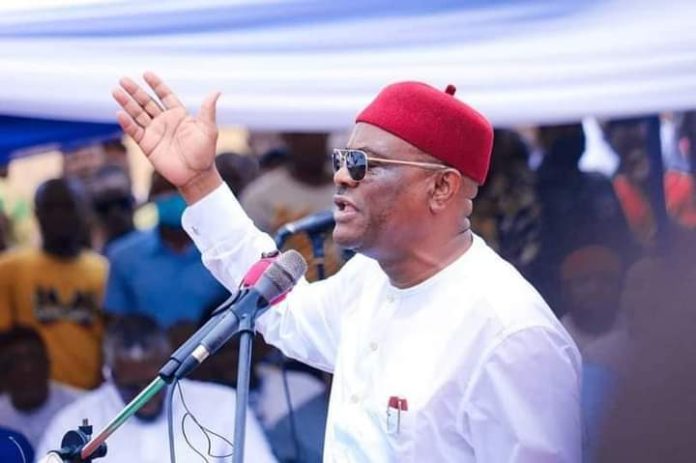 Rivers State Governor, Nyesom Ezenwo Wike has urged the Ebonyi State Governor, David Umahi to return the mandate he got on the platform of the Peoples Democratic party (PDP).

Governor Wike made the demand at the inauguration of the Eastern Bypass Road in Port Harcourt on Saturday.

He said it was rather unfortunate that instead of seeking appeal to the judgment of the court that had sacked him, Governor Umahi made a reckless statement attacking the judge.

“Look at a governor making a reckless statement simply because a judge made a judgement according to his own opinion, which you are entitled to appeal up to Supreme Court.

“You have called somebody a thief in the market and you’re saying I’m sorry, it is late. That your sorry, we the members of the public, we don’t take it.

Governor Wike said this was the first in Nigeria’s political history that defection of a governor to another party was being contested in court.

He opined that the decision of the Peoples Democratic Party (PDP) to challenge the defection of the governor and others elected on its platform should be seen as a clear example of what is required to strengthen democracy.

Governor Wike pointed out that it is members of the PDP who took Governor Umahi to court to demand the mandate of the party from him.

“If our party has done this earlier when people were leaving in the National Assembly, we won’t have had the problem we are having today.

“That is one of the problems of party leadership. People cannot come out and take the bull by the horns. So, Governor Umahi, be rest assured that PDP will continue this matter down to Supreme Court. We will continue with the matter.”

He said it is no longer acceptable that someone will win an election and defect with the victory to another party for fear of escaping visitation of the Economic and Financial Crime Commission, (EFCC).

“You carry the votes of another party and join another party. Can you transfer votes? You work hard for somebody to win election and tomorrow , the person say I have defected.

“If you have defected, leave the seat if you know it’s easy. And this will checkmate most of these political harlots who will never sit one place.”

The Rivers State Governor also took a swipe at the deputy governor of Edo State, who had spoken in an uncanny manner against the PDP.

Governor Wike said he has written to national chairman of the party and given reasons why a disciplinary committee needs to be set up against the deputy governor, who lost his ward in the last election.

“This is the thing I am talking about impunity. I was watching when a deputy governor was ranting in the media, threatening the party that there is an alternative to PDP.

“This is the same deputy governor who knelt down to beg for us to give them umbrella. Today, he has the effrontery to threaten PDP.”

Governor Wike also berated the Niger Delta Development Commission, NDDC, for abdicating their agreement of contributing 50 percent of the cost of the construction of the Eastern Bypass Road that leads to its corporate headquarters office in Port Harcourt.

Inauguration the road project, former Governor of Kogi State, Ibrahim Idris noted with delight the untiring delivery of projects by Governor Wike virtually in all sectors in order to provide quality living to Rivers people.

According to him, such measure of service in public office is evidence of transparency and accountability because the people can see how public resources are deplored for the good of all residents.

He affirmed that the entire PDP leadership identify and is proud of the quality of service provided by Governor Wike, who has become a worthy example of what political leadership should be in Nigeria.

Providing the project description, Rivers State Commissioner for Works, Elloka Tasie-Amadi said the Eastern Bypass Road that was 7.3m wide of single carriage without drains has been expanded into 18.5m wide to become dual carriage with drains.

He explained that the 3.348km long road now has 1.2m wide drain on both sides that is 6.7km long, has two carriage ways each measuring 7.3m wide with 1.5m median, which is fitted to serve the volume of vehicular traffic that ply the road daily.