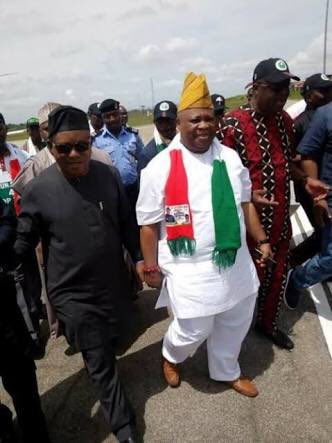 The crisis over the emergence of Senator Ademola Adeleke as the candidate of the Osun State Peoples Democratic Party (PDP) has taken another dimension.

This is as the members are now divided over the party’s preferred choice of deputy governorship candidate.

Ife-born Kola Adewusi had been selected by the PDP National Working Committee (NWC) and ratified Osun State Executive Council as the deputy gubernatorial candidate of the party for Saturday, July 16, 2022 gubernatorial election in the State.

However, PDP members in the four local governments in Ife land, who are loyal to Ademola Adeleke trooped out en-masse into the streets of the town protesting.

The protesting members, who had alleged that the choice of Adewusi as deputy to Adeleke was a wrong choice, added that as a former local government chairman, he was unfriendly and was not willing to help any party member.

According to Lasisi Adeyeniwa, “Being a former chairman of Ife East Local Government under the administration of Olagunsoye Oyinlola, he was known as ‘Kosese’ because he never rendered assistance to anybody who needed it.”

The protesting PDP members also alleged that one Prof Wale Oladipo, who is a cousin to Adewusi and close political ally of Ademola Adeleke, used his influence and connection to pick him as his running mate.

According to them, “Another reason for the wrong choice of Adewusi is his religion. A Christian-Christian ticket cannot fly in Osun State. Ademola Adeleke and Kola Adewusi are both Christians.

“The consensus and takeaway from the mass protest is that the Ife zone has rejected the slot of deputy Governor ceded to them.”

Osun political watchers have reiterated that the choice of Adewusi is a bad omen for the PDP in the State, which is bedeviled with too many crises as issue of candidature is still a subject of litigation at an Osun High Court, which has given judicial pronouncement to the INEC and the PDP National Secretariat to recognise Dotun Babayemi as the party’s candidate in the State.

Babayemi is said to have the backing of the founding elders and notable bigwigs of the PDP in the State, including Prince Olagunsoye Oyinlola, Erelu Olusola Obada, Alhaji Fatai Akinbade, Chief Tajudeen Oladipo and many others.

‘Remain in the North East until security improves’, Defence Minister to...