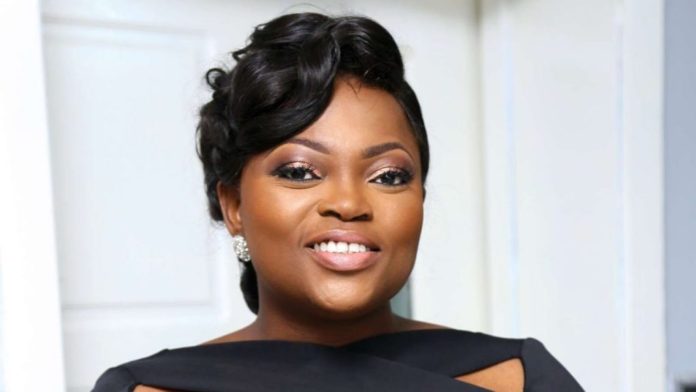 Jandor settled for Funke Akindele after unveiling her to party chieftains at a meeting held in Lagos vanguard reports.

A top PDP leader, who spoke to Vanguard in confidence, said Jandor refused the choice of Gbadebo Rhodes-Vivour to be his running mate.

The source said: “He (Jandor) introduced her before elders of the party and local government chairman this week.

“You know, this thing has limitation because of the new Electoral Act (amended) which says the candidate has the right to choose his running mate, but he must consult with leaders and elders of the party.

“Since he refused the choice of Rhodes-Vivour, there is nothing we can do about it. He has since settled for Funke Akindele.

“I have never heard of her, but she was

presented before the elders of the party. I understand she is a lawyer and an actress.

“The candidate will announce the choice of Funke Akindele soon.”

Recall that the PDP chairmen of the 20 local governments in the state had endorsed Gbadebo Rhodes-Vivour as the deputy governorship candidate.

“The Chairmen noted that Rhodes-Vivour would bring his wealth of knowledge and expertise to bear in effectively governing Lagos, especially given several years of misgovernance by the All Progressives Congress, APC.”

The PDP council Chairmen said in a signed letter that “as the Chairmen and Managers of our great Party, the PDP in Lagos State, we consider it to be well within our rights and obligations to play a major – nay, a leading – role in guiding our Party in the choice of its flagbearers for elective positions at various levels in the state as we begin the countdown to the 2023 general elections.”

The Chairmen further noted that several electoral benefits and criteria were considered before their endorsement.

Some of the criteria listed were “that the deputy governorship candidate should be a young person who can also be relied upon in terms of galvanizing electoral value across the length and breadth of the state.”

The Chairmen stated that “we hereby endorse Architect Gbadebo Rhodes-Vivour (fondly known as GRV among his teeming admirers), as the absolute best option among those that have indicated their interest in becoming the deputy-governorship candidate of our great Party in the 2023 polls.”

PDP Has No Opposition In NKPORO – Abia Deputy Governor Oko...