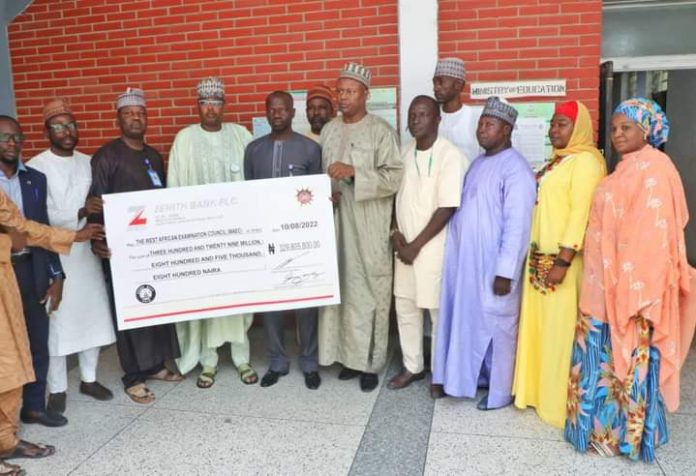 The State’s Commissioner for Education, Engr Lawan Abba Wakilbe, disclosed this on Wednesday in Maiduguri during a ceremonial presentation of cheque to officials of WAEC.

The cheque presentation was held at the conference hall of the state’s Ministry of Education in Musa Usman Secretariat.

“Government is paying N329,805,800 out of which N295,456,150 is for the settlement of State and Local Governments share, which is a subsidy of 75% of the 2022 WAEC Examination fees for 21, 827 students studying in public schools across Borno State, while the remaining Thirty-Four Million, Three Hundred and Forty-Nine Thousand, Six Hundred and Fifty Naira (N34,349,650) is to settle outstanding WAEC fees for the year 2018. With these, Government has now fully settled all its financial obligations to WAEC”, the education Commissioner said.

With the payment, Borno’s 21,827 students who wrote WAEC exams from public schools are now free to access their results as WAEC already released the results on WAEC’s online portal, Education Commissioner, Wakilbe confirmed.

He also said with 2022 payments done, the state government was focusing on 2023 exams and for that the state government appealed to WAEC to consider extending the 2023 WASSCE to take places in eight (8) Local Government Areas, namely Damboa, Gwoza, Ngala, Dikwa, Mafa, Monguno, Gubio and Mobbar.

He noted that male and female students from the listed LGAs face serious challenges of being forced to relocate to Boarding Schools in Maiduguri for at least three (3) Months.

With the recent release of over N300m to WAEC, Borno State Governor, Professor Babagana Umara Zulum, has so far released the combined sum of One Billion Five- Hundred and Sixty-Eight Million, One-Hundred and Ninety-Eight Thousand Five-Hundred and Ten Naira (N1,568,198,510) in three years, for WAEC, NECO and NABTEB exams in public schools.

… WAEC says Zulum has been consistent

The coordinator promised to ensure that all candidates who wrote the exams were able to access their results within hours and this was done.

On the increase of examination centers to eight additional local government areas, Abdullahi said that WAEC was ready for that, but needed government support in areas of logistics (mobility, security and accommodation of officials).

We are already in Chibok, Gwoza, Konduga and Kaga LGAs, the WAEC official said.

PHOTOS: Peter Obi conferred with honorary citizenship in Dallas, US