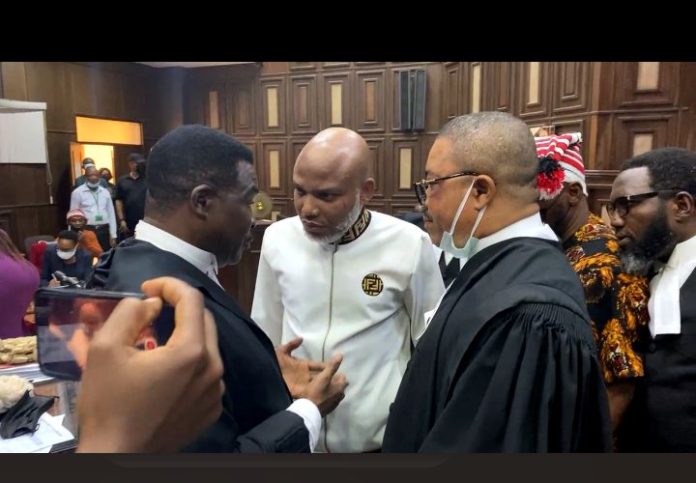 The United States lawyer of Nnamdi Kanu, leader of the Indigenous People of Biafra, IPOB, Bruce Fein, has written to the British envoy in Nigeria over the continued incarceration of the Biafra agitator.

The UN Working Group had called on the Federal Government to immediately and unconditionally release Kanu.

In a document, the body also indicted both Nigeria and Kenya for Kanu’s abduction and rendition.

Despite the call by the UN Working Group, Fein had written to the U.K. envoy demanding it prevails on Nigeria to release the IPOB leader. A copy of Fein’s letter was made available to newsmen by Kanu’s Special Counsel, Aloy Ejimakor.

The full text of the letter reads below.

Among other things, the Working Group Opinion called upon Nigeria “to take urgent action to ensure the immediate, unconditional release of Mr. Kanu.” (Paragraph 107)

The villainous maltreatment of Nnamdi Kanu by Nigeria and Kenya prompted the Working Group to refer his case to Special Rapporteur on torture and other cruel, inhuman, or degrading treatment or punishment. (Paragraph 109).

More than one month has elapsed since the unambiguous Working Group Opinion. Nigeria has sneered at the Opinion as nothing but a scrap of paper like Belgium neutrality scorned by Germany in World War I to which Britain responded with war.

Once upon a time, the United Kingdom fiercely defended its citizens against lawlessness by foreign nations. It fought the War of Jenkins Ear in 1739 with Spain over an amputated ear of a British Captain by Spanish coast guards in the West Indies.

Nnamdi Kanu is a British citizen. He has suffered far more than Captain Jenkins at the hands of Nigeria and Kenya as corroborated and held by the U.N. Working Group. Yet you have done nothing to secure Mr. Kanu’s immediate and unconditional release as mandated by international law. Indeed, you have idled like Nero fiddling while Rome burned. You cannot claim ignorance. A copy of the crystal-clear Working Group Opinion is before you.

You are embarrassing the United Kingdom and the cause of human rights. Think of the stupendous contrast. The United States is moving heaven and earth to obtain the release of a United States basketball player from Russia after she pled guilty to a drug violation. It has offered to trade a notorious imprisoned arms trafficker Viktor Bout in exchange for Britney Griner’s freedom.

Nnamdi Kanu, unlike Mr. Griner, is innocent. He has not been convicted of any crime. Indeed, he is a victim of multiple crimes perpetrated by Nigerian and Kenyan authorities. Yet you and your superiors continue to permit Mr. Kanu to suffer in a Nigerian dungeon in flagrant violation of international law.

Have you no sense of decency? Has Great Britain sold its soul for a mess of pottage? Is the United Kingdom the land of Magna Carta and the immortal Winston Churchill with his dauntless denunciations of Nazi Germany?

Russia’s attack on Ukraine is a tea party compared with Nigeria’s ongoing genocide of Biafrans—the Holocaust sans the gas chambers. It is not acceptable under law or God that Great Britain would declaim against the former and ignore the latter. Your silence is making Great Britain’s presidency of the United Nations Security Council a joke.

I regret the resort to language outside the customary euphemisms of diplomacy. But justice for Nnamdi Kanu and 70-80 million Biafrans is too important to be left to ambiguous clues or semaphores.

I would respectfully request that you inform me promptly of the steps you have taken or contemplate taking to secure Nigeria’s compliance with the Working Group Opinion calling for Nnamdi Kanu’s immediate, unconditional release and reparations. Nothing would gratify me more than for you to earn an honored chapter in the annals of human rights and international law