Home PUO NEWS Our Support To NYSC, A Token Of Appreciation – Wike 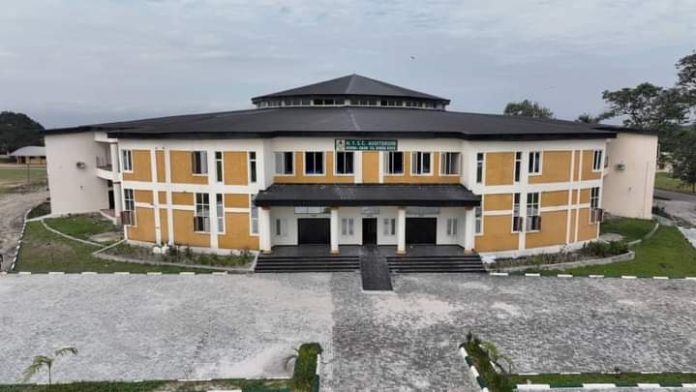 Rivers State governor, Nyesom Ezenwo Wike says his administration is delighted at improving the poor condition of facilities used by members of the National Youth Service Corps, NYSC in their camp in Nonwa-Gbam in Tai Local Government Area of the State.

The governor observed that members of NYSC, who are humans do not need to be subjected to facilities that dehumanise them while serving in the State.

He spoke on Thursday at the formal inauguration ceremony and hand over of the 5000 capacity Ultra Modern Auditorium at the NYSC camp, built by his administration.

“The first day I came here and saw the poor state of facilities in the camp here, I said, how can we allow graduates; those of them who have first degrees, second degrees, even PhDs, to be camped in an area that is not worthy for humans to stay.

“We tried, starting by building hostels for them. We built a kitchen for them but it was vandalised by criminals. I had to send people to rebuild the kitchen for them. Look at the landscaping. We have done all the internal roads here.”

Governor Wike noted that some people had said that NYSC is a federal agency, but he had asked to know who the members of NYSC posted to the State are serving.

“Therefore, it doesn’t matter whether they’re federal government agency or not. What matters to us is the services they render and those services are render to the people of the State. Therefore, we would do everything we can to make them comfortable.”

Governor Wike informed that the plan was conceived to build an auditorium for the NYSC since they do not have such facility within the camp.

Without such auditorium, Governor Wike noted how difficult it could be for corps and officials of NYSC to have comfortable meeting whenever their coordinator or the Director General would choose to address the member collectively.

“So, we decided to build a 5000 capacity auditorium for them. This project would have been completed before now, but the contractor ran away with the money. But I said nothing will deter us, we must complete it.

“We awarded it to the second person and to the glory of God, today, we are commissioning the ultra-modern auditorium.

“For us, whether they’re from here or not, as long as they render services to the State, we need to acknowledge and appreciate it.”

Performing the inauguration of the 5000 capacity Ultra Modern Auditorium, Director-General of NYSC, Brigadier General Mohammed Fadah thanked the governor for his magnanimity and named the facility, His Excellency Nyesom Ezenwo Wike Hall.

Brigadier General Fadah informed that there is no NYSC camp across the country that has such auditorium that has been provided by Governor Wike to the camp in Rivers State.

“Governor Wike had done a lot for us. This occasion offers us a unique opportunity for appreciating your numerous people oriented projects. It is also heartwarming to note that the State government, under your able leadership, has done a lot for NYSC.

“You renovated corps’ hostel and official residences and the multipurpose hall. You constructed drainages, you reconstructed the burnt dinning hall, you restored the payment of monthly allowances of corps members to Rivers State. You restored payment of running cost to the secretariat among other support.”

Providing a description of the project, Rivers State Commissioner for Special Projects, Deinma Iyalla, said the 5000 capacity Ultra Modern Auditorium has a seating arrangement with the gallery taking 2500 and the ground level taking 2500.

He stated that there are four multimedia screens, computerised PA system, nine offices, two boardrooms, and two changing rooms in the facility.

Excellence is about serving the people – Abia Speaker