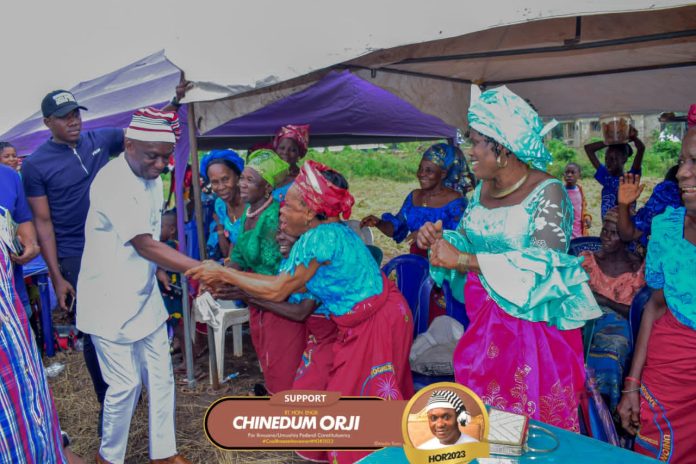 …to Procure Industrial Cassava Processing Machine for their Use

Speaking at the event, the Speaker congratulated the women on the occasion and thanked them for their unwavering support for him over the years.

He used the opportunity to educate them on the need for them to be active participants in the forthcoming general elections, saying that women are the foundation of every political setting and they should make sure they support only credible candidates.

The Speaker made a pledge to enable the women procure a modern cassava processing machine and a piece of land upon which the machine will be installed.
The Speaker also promised to grade the long stretch of Ofeme road once the dry season sets in, all to the thunderous applause of the women.

On his part, the Senior Pastor of Royal Choice Ministries, Bishop Success Ibeakanma, who was ably representd by Mr Anointing Ikechukwu Ayozie equally congratulated the women and emphasised that the Speaker has done excellently well both in his legislative duties and in delivering dividends of democracy to the people. He pledged to champion the cause of the Speaker and ensure he is returned elected as the next member to represent the people of Ikwuano/Umuahia Federal Constituency at the National Assembly, Abuja.

The Bishop who is an indigene of Ihite Ude Ofeme, also made financial support to the women.

Hosting the Speaker in his home, Hon Chief Ifeanyi Godwin Anyaogu (Special Adviser to the President on National Youth Council ), Osinachi 1 of Ofeme and the Chief Executive Officer of Starrex Global Group of Companies, said he was overwhelmed with the outpouring of sincere love from the Speaker to his people especially the women.

Chief Ifeanyi Anyaogu said the people of Ofeme have already resolved to support the Speaker in his political ambition to represent the good people of Ikwuano/Umuahia at the Federal House of Representatives.

Rt Hon Chinedum Enyinnaya Orji was accompanied to the event by the Director-General of his campaign council, Pastor Emeka Inyama, the Youths Representative in the Speaker’s campaign council, Mr Benjamin Ifeanyi Apugo, while the Peoples Democratic Party flagbearer for Umuahia North State Constituency, Hon Ugochukwu Ezeocha and a host of other dignitaries graced the event.

The Speaker also joined the women in the cutting of their annual event cake. 2 Students Dead, Others Injured As Bridge Collapses In Bauchi