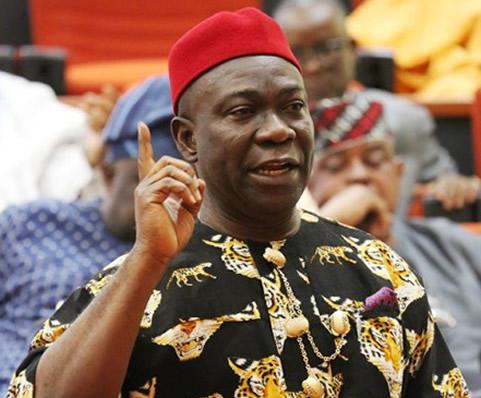 Ohanaeze Ndigbo, an apex socio-cultural Igbo group, has appealed to the Federal Government not to abandon former Deputy Senate President, Ike Ekweremadu and his wife, Beatrice.

Ohanaeze urged the Federal Government to interfere in the trial of Ekweremadu, and transfer it to Nigeria.

Recall Ekweremadu and his wife are facing trial for alleged organ harvesting in the United Kingdom.

The former Deputy Senate President was accused of importing a Nigerian into the UK for the purpose of harvesting his kidney.

The kidney was meant to be harvested and transplanted to Ekweremadu’s daughter.

But the Attorney General of the Federation, Abubakar Malami, said the Nigerian Government would not interfere in Ekweremadu’s trial.

Malami said it’s not the tradition of the Nigerian Government to interfere in such trials both locally and internationally.

However, the National Publicity Secretary of Ohanaeze, Dr. Alex Ogbonnia, disagreed with Malami on the claim that the Nigerian Government can’t interfere in Ekweremadu’s trial.

According to Ogbonnia: “Ohanaeze Ndigbo believes that Ekweremadu’s case should not be different, especially when Nigeria enjoys longstanding cordial relations with the UK, and all the individuals involved in the UK case are Nigerian nationals.

“The Nigerian Government and indeed all Nigerians should know that a measured indignity to Ike Ekweremadu, an illustrious Igbo and a serving senator of the Federal Republic of Nigeria is a sad denouement to Nigeria and indeed the entire Africa.

“We urge the Federal Government led by President Muhammadu Buhari and Mr. Geffrey Onyeama, Minister of Foreign Affairs; Nigeria High Commission in the UK, the Senate and House of Representatives to burnish their diplomatic channels in ensuring that Ekweremadu and wife get the desired assistance by transferring the case to Nigeria.”