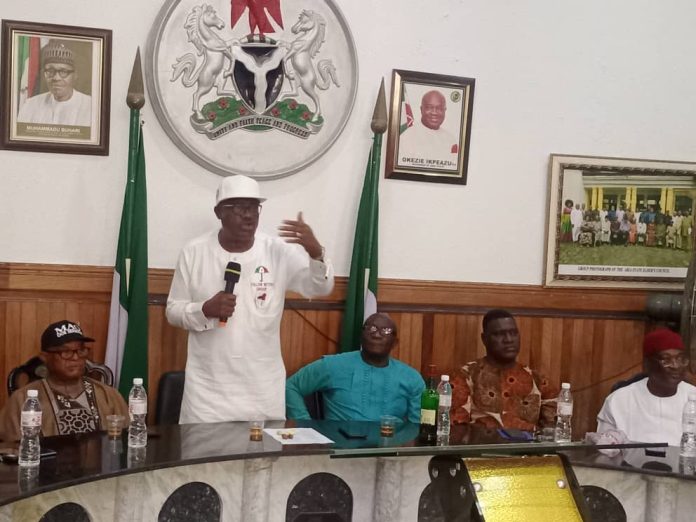 Senator Mao Ohuabunwa has vowed to unseat his successor, Senator Orji Uzor Kalu and return to the red chamber in 2023.

The former Leader, ECOWAS Parliament, who made the vow Saturday in Umuahia while inuagurating his campaign Council, decried what he called the precarious condition of the zone.

Ohuabunwa who said that “Abia North is under siege”, called for urgent action to rescue the zone from “political hijackers.”

” Nobody speaks for us again. Something has to be done and urgently too for us to recover. We cannot afford to stand aloof. We must speak out now.”

Ohuabunwa regretted that the N5.2 billion Arochukwu/Ohafia/Bende/Umuahia federal road he attracted while in the Senate had almost been abandoned for lack of follow up.

He further regretted that his Bill for the takeover of the College of Education Technical Arochukwu by the Federal Government; as well as the establishment of Federal Polytechnic Item, which had all passed third reading respectively, could not be followed up by his successor.

He decried the rising insecurity in the zone and urged the people to unite against forces behind the predicaments of Abia North.

The former Leader, House of Representatives, regretted that since he left the Senate in 2019, Abia North had “almost become voicelesnes and without political direction”.

He said that Abia North had taken the backseat in the political equilibrum of the state, and called on the people to rise and reclaim their enviable position.

Ohuabunwa said he was fully prepared to return to the senate to give the zone a quality representation, and pleaded with anyone who had any ill-feeling against him to forgive and support his return bid.

Inuagurating the Campaign Council later, the Deputy National Legal Adviser of the PDP, Chief Okechukwu Osuoha, expressed displeasure over the state of affairs in Abia North, and urged the people to unite change the narrative.

He expressed optimism that Ohuabunwa would return to the Senate in 2023, and charged members of the Council to work assiduously to actualise his ambition

Some of the members of the Council to be chaired by Ohuabunwa himself are the immediate- past Secretary to State Government, SSG, Dr Eme Okoro (Co-chair); former Military Administrator of Cross River State, Capt. Chris Osondu; former Commissioner for Small and Medium Enterprise, Gab Igboko (Secretary); and oil magnet, Chief Odinaka Igwe.

The Council also had Coordinating teams in each of the five LGAs in the zone.

Speaking on behalf of other members of the Council, Chief Mba said Abia North had learnt in a hard way, ” the mistake of 2019″, and had resolved to send their first eleven to Abuja.

He pledged their resolve to mobilise voters across all wards in the state to accomplish the task.