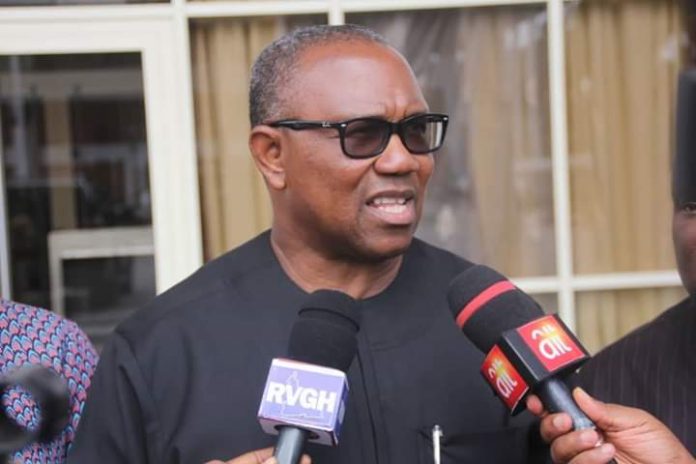 Peter Obi, the presidential candidate of the Labour Party, has pledged the commitment of the party to reverse the current trend where Nigerian youths and children are sent abroad because of rising cases of lack of opportunities in the country.

Obi, spoke at the official reception of Mr. Valentine Ozigbo, a former governorship candidate of the Peoples Democratic Party, into the fold of the Labour Party, in Lagos on Tuesday.

Obi said the mission of the Labour Party is to take the country and hand her back to the people, saying Brazil was in a similar position with Nigeria until recently but today Brazilians can feed themselves and export agricultural produce.

He reiterated his call for the nation to move from consumption to production, saying that remains the goal of the party.

“The wealth of a nation is not determined by the landmass but the level of production in the country. Nigeria is not a producing nation, let’s go out and produce. Prayer is not enough, we must go out to work.

He assured Ozigbo and his supporters of equal opportunities in the Labour Party.

Also speaking while receiving the new members, Julius Abure, chairman of the Labour Party, said the party is not open to everybody but those with integrity and who have something to offer.

“The Obi movement is driven by intelligent people with integrity and competence. Ozigbo has those criteria. He meets our criteria to belong to our party. “The inflationary rate today is 19.5 percent. There is a need to rescue this nation. Ozigbo has joined in the struggle to rescue the nation,” he said.

The party chairman promised a level playing ground and equal opportunities to Ozigbo and his supporters now in the party.

“You have equal status with all members and entitled to all privileges,” he said, adding that the journey for the liberation of Nigeria has now started.

Speaking on behalf of himself and his supporters, Ozigbo expressed delight in joining the party. He said the move was just to formalise what had started earlier.