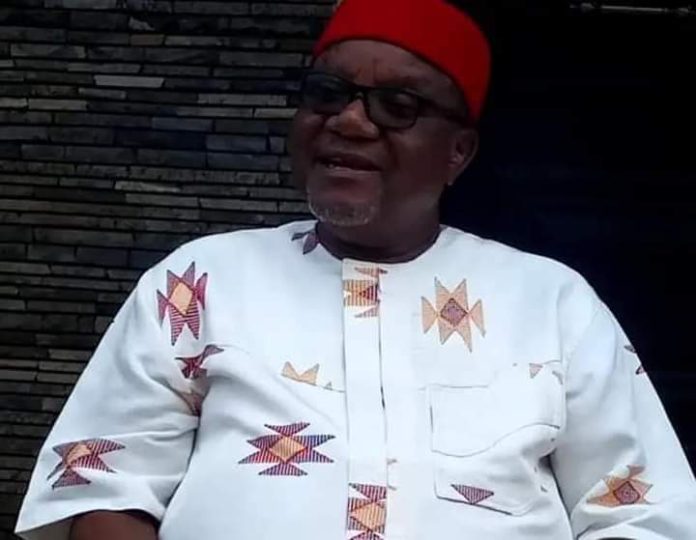 The attention of the Abia PDP has been drawn to an interview granted to the press by former Commissioner for Local Government and Chieftaincy Affairs in Abia State, Chief Charles Ogbonna, during which he advised Governor Okezie Ikpeazu to stop following Governor Wike of Rivers State around and tackle Abia’s infrastructural deficit.

Nothing can be more condescending for a man like Charles Ogbonna who has reached such a lofty height in politics and should know the internal workings of government and the rudiments of political communications to ebb to the lowest level possible and turn a non-issue into a political big-fight for the sake of selfish personal interest.

For a man like Chief Charles Ogbonna who served as a high-level Commissioner under Governor Ikpeazu and has unfettered and unimpeded access to the governor to take to the public space to advise the governor is a clear proof that the advice is not ordinary but fully laden with bad political intent.

During the time Charles Ogbonna served in this government, at no point did the issue of Abia’s infrastructural decay take center stage in his engagements with the governor; privately or publicly, but suddenly and very explainable, has in the past two years, become a social media activist whose stock in trade is attacking the governor and his government.

For the avoidance of doubt, Charles Ogbonna and those in cahoots with him should understand that Abians are not unaware of the undercurrents that propel such ill-informed outbursts that are intended to embarrass the government. In due course, Abians who we are sure know the subterranean influences would be told the full story of Charles Ogbonna and his ilks.

Without reverencing the unimaginative and unsolicited advice given by Ogbonna, it is the duty of the Abia PDP to inform the good people of Abia about the engagements of Governor Ikpeazu and his colleague-governors, Nyesom Wike of Rivers State and Samuel Ortom of Benue State and the state of Abia’s infrastructure that is at issue, though undeservingly.

It is instructive to reference these doublespeak and uncharitable comments considering that this same Charles Ogbonna that is complaining about the Governor’s involvement in the effort to create a working road map for the success of the PDP at all levels is the Team Lead of the Atiku Abubakar Campaign Organisation in Abia State. What an irony of leadership? One wonders how he will probate and reprobate on the same issue he should be on the same page with the governor. Talk of bad political intent.

Abians would recall that in the lead up to the presidential primaries, High Chief Raymond Dokpesi led a delegation to Abia State on behalf of the PDP presidential candidate Alhaji Atiku Abubakar and promised that Atiku Abubakar, if elected would only serve for one term and handover power to the South East. That promise is a part of the commitments Ikpeazu and Wike have put up before Atiku for reconfirmation and remains a basis for negotiation for the South East and the South South.

Governor Ikpeazu’s high-level involvement in the 2023 struggle has become increasingly imperative given the rising tide of extraneous forces that seek to push aside the PDP at the national level. For one thing Alhaji Atiku Abubakar holds Governor Okezie Ikpeazu in high esteem and sees him as one, if not the only person that can moderate as well as modulate the Nyesom Wike influence which is threatening to undo the PDP.

If the governors trip to London was such a big issue that it should form a talking point for little minds like Charles Ogbonna, why did the PDP flag bearer, Alhaji Atiku Abubakar, former President Olusegn Obasanjo, Labour Party presidential candidate, Mr. Peter Obi and his APC counterpart Senator Ahmed Bola Tinubu all scurry to London for the meeting?

For the records, the political romance between Governors Okezie Ikpeazu and Nyesom Wike is based on mutual respect and of equal value and significance as colleague-governors. While Dr. Okezie Ikpeazu was at the commissioning of some projects in Rivers State last week as duly invited by his colleague, same gesture has also been extended to Governor Wike to be part of the commissioning of some flagship projects in Abia State next Monday to mark the closure of celebrations for the 31st anniversary of the creation of Abia State.

And for the issue of tackling Abia’s infrastructural deficit, let it be known that Governor Okezie’s performance in comparison with others that have ruled the State in the recent past, stands tallest. At last count, the Okezie Ikpeazu administration has delivered more than 150 roads in Abia State within the last seven years he assumed office even as efforts are ongoing to deliver more roads and other physical infrastructure before the expiration of his tenure in May 2023.

All told, Charles Ogbonna should understand that Dr. Okezie Ikpeazu has more stake in the PDP than he does and will not descend to the level of exchanging words on the pages of social media with him. In the PDP Hall of Fame; local or national, Okezie Ikpeazu’s place ranks higher than Charles Ogbonna’s.

We call on Ndi Abia to disregard the vituperations of people like Charles Ogbonna who have suddenly become detractors because they have fallen out of favour with the government of the day. Abians should trust in the ability and leadership of Governor Okezie Ikpeazu and the PDP to leave lasting legacies for posterity to judge.

Ahead of the 2023 general election, the PDP calls on all Abians to join hands with the leadership of the Party at all levels to midwife a transition that would make not just Abia and the South East but the whole of Nigeria a better place for all.

Abians beware who you listen to!

Imo Governor, Ihedioha Reassures His Focus On The Rebuilding Process