Home PUO NEWS You Have Written Your Own History, Buhari Tells Uzodimma 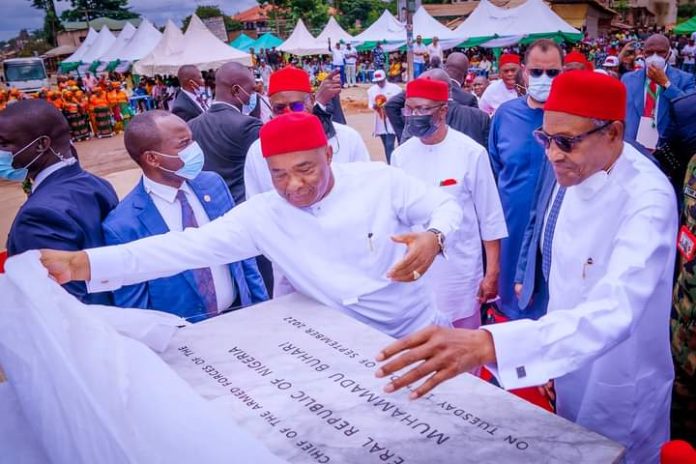 President Muhammadu Buhari Tuesday in Owerri, Imo State, commended Gov. Hope Uzodimma for his efforts in developing the state, saying, “You have written your own history,’’ after he saw the ultra-modern chamber of the rebuilt House of Assembly.

President said his administration will leave a legacy of major development projects across the country, while saluting Imo State Governor for giving more attention to constructions and institutional reforms that will improve lives of the people.

President Buhari, who commissioned the Owerri/Orlu dual carriage, Owerri/Okigwe road and the renovated House of Assembly Complex, noted that the Imo State government had made remarkable progress with infrastructure in three years.

“I am delighted to be back in Imo State – the Eastern Heartland – to commission a number of projects executed by the administration of His Excellency, Governor Hope Uzodimma.

“I am happy to note that within just three years of the administration of Governor Uzodimma, I have made two official visits to Imo State to commission projects in the state.

“On each occasion, I have received a very warm hospitality of Imo people, for which I am always appreciative. Ndi Imo, Ndewo!

“As it is often said in local Igbo parlance, a good road deserves a second passage. It is a pleasant coincidence that the name of your governor, “Uzodimma” is derived from this same idiom. Little wonder, therefore, that he has made the provision of good roads one of his top priorities,” he said.

“This can be seen in our commitment to certain critical projects such as Deep Sea Ports, new airport terminals and buildings, various railway projects, a network of gas and power infrastructure, roads and bridges including the Second Niger Bridge, telecommunications infrastructure to mention but a few.

“I am therefore happy to see that the APC administration of Governor Uzodimma is doing similar improvement here in Imo State.

“I commend the Governor for being able to do so with the limited resources at the disposal of the State Government. This proves that when leaders are dedicated and focused, much can be achieved for our people, “ he added.

The President said the Federal Government will continue to support the government of Imo State to ensure that it continues to provide the dividends of democracy to the people.

“This support is equally available to all the states of the Federation irrespective of the differences in political party affiliations,’” he assured.

The President encouraged Imo State indigenes to keep supporting the Governor to actualize his dream for the state, particularly on good governance.

“In my last visit here, I encouraged you all to support your Governor so that he can do more for the people of Imo state. I am happy that you took my advice and today, he has presented to me three key projects for commissioning.

“I have just commissioned the dualized Owerri – Orlu road, the Owerri Okigwe road (Phase 1) and the rebuilt House of Assembly Complex.

“I am told that these two major roads, which I commissioned, cut through several local government areas of the state. The roads will therefore serve as major stimulants to the local economy of these parts of the state,” the President stated.

President Buhari noted that previous administrations in the state were unable to fix the roads because of their unique and difficult terrains, which were complicated by erosion.

According to him, “it took the sheer determination and courage of the current government to fix these roads. So, I say “Bravo” to the Governor of Imo State, whose name I was informed means “good road”.

“I was also informed that the House of Assembly Complex which I have just commissioned was dilapidated and abandoned for over 10 years before the intervention of the present administration.

“This is equally commendable, because of the importance of the legislative arm of government in the sustenance of democracy. I, therefore, applaud the governor for according due respect to this arm of government which is at the heart of our democracy, “ he said.

President Buhari extoled the Government of Imo state for “the road revolution”, describing it as “infrastructure revolution”.

In his remarks, the Imo State Governor noted that the Owerri/Orlu dual carriage and Owerri/Okigwe road had significant economic value to the state and other neighboring states.

“Each of the projects has a remarkable history. Behind the dualized road has been a nightmare for decades,’’ he said, adding that erosion made the construction more difficult.

Gov. Uzodimma said: “To the glory of God we have found the courage, dedication and means to fix the road. The seemingly intractable challenges have been addressed.’’

The Imo State Governor noted that the renovation of the House of Assembly had made it more befitting for the lawmakers, after it was abandoned for many years.

The Governor thanked President for his interventions to ensure development in the South East, with historic projects, like second Niger Bridge, which would gulp the highest single investment in the zone of more than ₦360 billion, approval for upgrading of the Federal Medical Centre to a teaching hospital and establishment of a naval base in Oguta, Imo State.

Otti Is A Desperate Liar And Manipulator – Ikpeazu