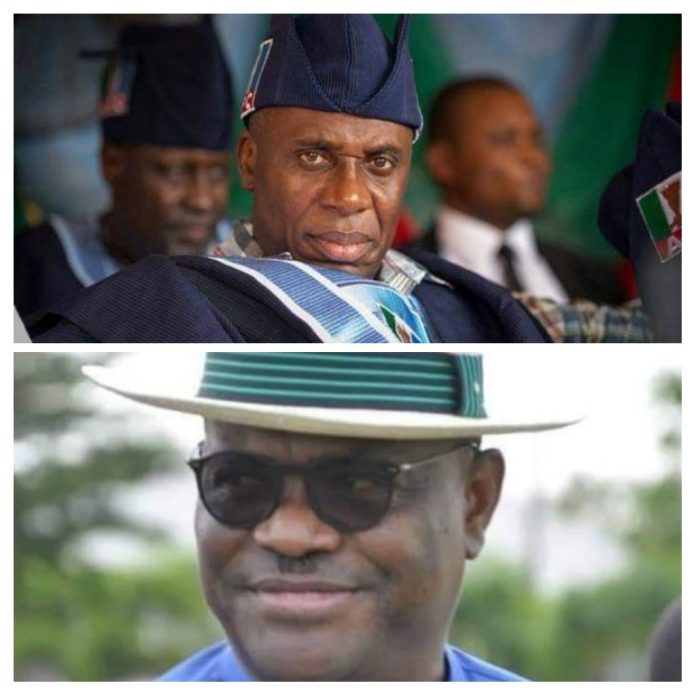 All Progressives Congress (APC) in Rivers state yesterday fired back at Governor Wike for labelling his predecessor and former Minister of Transportation, Rotimi Amaechi a ‘total failure’ for his perceived inability to attract development to Rivers in over seven years as a minister.

Wike at a public function in Port Harcourt Monday had fiercely dressed down the Rivers APC leader for expressing disappointment at the perceived insensitivity of Governor Wike and his administration to the wellbeing of four times federal minister, Alabo T O Graham-Douglas through the protracted illness leading to his death as Wike was also absent at the funeral on Saturday.

Responding to the Governor’s tirade against Amaechi, Spokesman to Rivers APC, Darlington Nwauju, said though the party wasn’t prepared to drift into toxic communication to get even with Wike, the leadership would not fold their hands and allow the Governor to denigrate their leader in perceived distortion of history.

Justifying the footprints of Amaechi in Rivers and Nigeria at large as Governor and later minister with a list of achievements, Nwauju said, “The APC is not a shallow ground where people cannot keep records or lack institutional memory. We are abreast of history as we all Rivers people. We know who is who and what is what.

“Our response to Wike’s scathing remarks against the minister and our party is not to debunk claims but to rightly lay bare the truth. We are interested in the insinuation that our Leader, Amaechi is a failure and could not attract anything as a federal minister to Rivers.”

Nwauju noted that though it is unheard of that a minister is appointed to serve his state even though you are to represent that state in the cabinet, minister Amaechi made very meaningful contributions to the growth of Rivers state against the dummy Wike attempts to sell to the public that he did nothing.

“This (Amaechi) is a man that has served Rivers passionately as governor, served as speaker, and contributed immensely to the success of the APC in Nigeria. There is satisfactory proof that the claim that our leader never did anything to better the lives of Rivers people is totally false, sheer blackmail and we as a party will not allow his image to be so smeared.”

Rivers APC in the lengthy list of Amaechi’s legacy, mentioned among others, “Afam Fast Power Project: Construction of US$186 million, 240MW expansion for the existing Afam Power Plant (commenced in 2016, almost completed).

“Rehabilitation of Sections 1 to 4 of the Enugu—Port Harcourt Expressway (ongoing). Construction of an ongoing 120 billion Naira Bonny-Bodo Road in Rivers State, jointly funded by the Federal Government and the Nigeria Liquified Natural Gas Company Limited.

“Completion of installation and commissioning into service of a brand new 300MVA 330/132/33kV power transformer in the Alaoji Transmission Substation, increasing the station’s installed capacity from 450MVA to 750MVA and making it the biggest substation in Southern Nigeria.

Nwauju further listed the development of Eastern Ports to decongest Lagos, Bonny Deep Seaport Project capable of employing over 7000 skilled workers, hundreds of Rivers people are employed in the Ministry of Transportation, airports across the country, NPA, and many of them trained as seafarers, safety marshals in NIMASA.

On the claim by Wike that Rivers APC has become empty with the defection of several members to the PDP, Nwauju countered that nothing could be further from the truth ruling PDP in Rivers has suffered more high-profile defections to the APC.