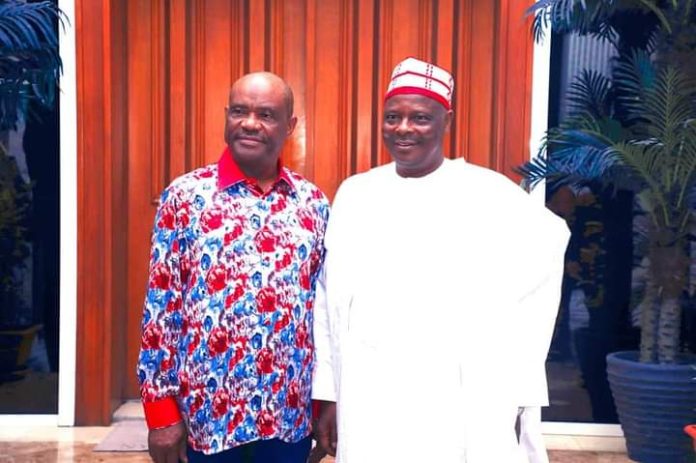 Rivers State governor, Nyesom Ezenwo Wike says Nigeria is in dire need of a unifier that will drive the affairs of governance without any form of segregation.

Governor Wike expressed grave concern about how the diversity of the country has been grossly threatened by those who have resorted to campaign on the basis of ethnic and regional sentiment. According to him, such parochial tendency will make Nigerians more divided along religious and ethnic lines than ever before.

The Rivers State governor stated further that members of his integrity group are resolved to do what is right always as long as it will help to advance the county.

The governor explained that he had tried in vain to persuade leaders of the Peoples Democratic Party not to allow Kwankwaso not to leave the party because of the strategic importance of Kano State.

“When you wanted to leave PDP, I came to your house in Abuja. I said sir, don’t leave the party. I pleaded with you. I came two times. Those who never meant well for this party, who will want to take control where they never sowed. They said no, leave Kwankwaso to go. Who is he? Let him go, after all, I was a Senate President when he was Deputy Speaker House of Representatives. I said no, he is an asset to the party in Kano State. Kano is very important for our party, therefore, whatever it takes let’s keep him, let manage him. They said let him go.

“I said the more the merrier. We are opposition party, we cannot continue to drive our people away. Whoever is angry, let’s keep him, they said no. They said I went to see Kwankwaso, I said yes, because I know with him in Kano, there is likelihood that it will be better for us. But if we allow him to go, the repercussion will be too heavy. They said no. Kwankwaso left us.”

Governor Wike offered to provide protocol and logistics support to Kwankwaso whenever he wants to do his campaigns in Rivers State.

“If you’re coming for campaign here, I will give you the logistic support for you to campaign. You’re a former governor.”

He however, told Kwankwaso that it is difficult for any other party to win in Rivers State, therefore, it will be futile for him to waste resources, thinking he will win election for any candidate of his party in the State.

About his comment on release of unpaid 13% derivation money from 1999 to date, by President Muhammadu Buhari, Governor Wike said he never said other Niger Delta governors should show proof of what they have done with their States’share.

Rather, Governor Wike stated that he only expressed his gratitude to President Buhari for releasing the money, which has helped him to execute a plethora of projects in the State.

“I never said people should account for their money. I never said so to anybody. All I said is people should thank Buhari for me, for giving me money to do all these projects. That all I said. If you people are interpreting a different thing that is your own business. Is it wrong to thank somebody who has done well for you?”

Governor Wike emphasised that his administration has never spent more than 14 months to deliver on any project in the State.

He pointed to the Mgbuitanwo Internal Roads as being among 20 other projects like the 9th, 10th flyovers that were all flagged off in June 2021, which have all been completed within the period.

Governor Wike said good governance is about the wellbeing of the people and if anybody in government or close to any top functionary is unable to attract project to his or her community, such person has failed

The governor stressed that his administration has delivered the Mgbuitanwo Internal Roads which is where Senator Andrew Uchendu, an All Progressives Congress chieftain hails from. He regretted that the former senator failed, while in government, to do the road for his community.

Governor Wike also mocked former Commissioner for Agriculture, Emma Chinda because he failed to attract government to do the roads for his Ogbakiri community, which his administration is now delivering for the people.

Such gesture, Kwankwaso noted speaks of a leader who loves his people and is doing the best to better their lot across sectors including the provision of quality educational infrastructure.

Kwankwaso stressed that those who are undermining the capability of the PDP G-5, particularly governor Wike, are doing so to their peril politically because Rivers State like Kano, and Lagos is critical to wining any election.

The NNPP presidential candidate stated that members of the Integrity Group led by governor Wike, are good people who will continue to do the right thing, and will be judged by posterity based on what they do

Regional Manager, South-South of Julius Berger Nigeria PLC, Jergen Fitcher said they have continued to deliver standard infrastructure in support of governor Wike policy of development of the State.