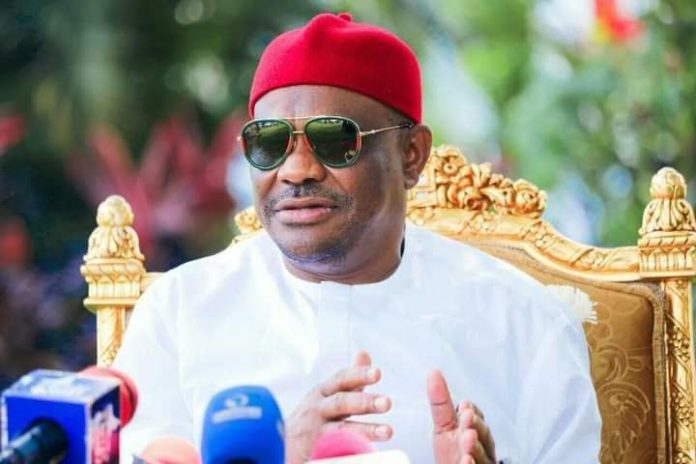 The Rivers State government has issued stern warning to a faceless group that is orchestrating a campaign of calumny against Governor Nyesom Ezenwo Wike.

Members of the faceless group, described as political detractors, seemed vexed over the role of governor Wike in the collective demand by the five governors (G-5) of the Peoples Democratic party (PDP) for fairness, equity and justice in the party.

Rivers State Commissioner for Information and Communications, Chris Finebone, who briefed journalists in Port Harcourt, also displayed a well worded document bearing the sinister plot of the group, which was however, not signed.

“This is the evidence of the plot to blackmail Governor Wike. This is the document and it is titled, ‘proposal with hashtag, to end Wike rascality programme.'”

Finebone declared that this development is not totally unexpected by the government and the governor.

What is sad about it, he noted is that those behind it have decided to remain faceless.

“We encouraged them to remove their mask and show themselves as the governor and the government is equal to the task of responding to them adequately.”

The Information and Communications Commissioner pointed out to the fact that the State government already has an idea of the likely identity of the political detractors who are orchestrating the campaign of calumny against governor Wike.

He stated that they are individuals within the party and challenged them to reveal themselves if they are convinced of what they are doing and bold enough for the fight they seek.

“We expect more of them to come. But I can assure you that the governor and the G-5 would rise to the occasion as they continue to start this type of campaign of calumny.”

Finebone also briefed on another decision of the State government to seal off the premises of the EUI Event Centre that is located along Sani Abacha link Road within the Government Reserved Area (GRA) phase 3, Port Harcourt.

He said the EUI Event Center had refused to heed several warnings from the Rivers State government instructing them not to allow their activities block the road without the requisite approval.

“The management of EUI Events Center had refused to refrain from blocking an entire stretch of part of Sani Abacha link Road, GRA phase 3 without government approval.

He declared that the Rivers State government has with effect from Wednesday 7th December 2022 sealed the EUI Events Center in GRA phase 3, Port Harcourt.

Finebone said very often, owners of event centres in the State fail to plan for the vehicles of their guests; how the vehicles will be parked and how other road users would use the same road.

Rather, he noted, they simply block the road and do not care about the consequences while also shunning candid advise given to them to curtail such public nuisance.

“Government cannot fold its hands and watch people exercise impunity to the highest level by appropriating property government built with tax payers money just to their own personal use and comfort. Government must protect all.”

Also briefing journalists, the Commissioner for Physical Planning and Urban Development, Austen Ben Chioma explained the decision followed by the Wednesday’s obstruction of free flow of traffic on the road by the management of the EUI Event Center.

This, he noted, was in variance to promises they had made to government that they would always make sure that their traffic wardens control traffic properly so that other road users are not punished.

“But to the greatest surprise of the Rivers State government, today’s event that is holding there, there was no road for road users to pass and road users were complaining bitterly.

“I got the information and I went there myself and I saw that the road was totally blocked. I told the owner of the place that this cannot be tolerated. And she said that she has done her best and she cannot kill herself.”

Chatham House: Tinubu’s outing preview of what Nigerians should expect in 2023 – APC

2023 presidency: Why Tinubu is right for not honouring debates invite – Kalu