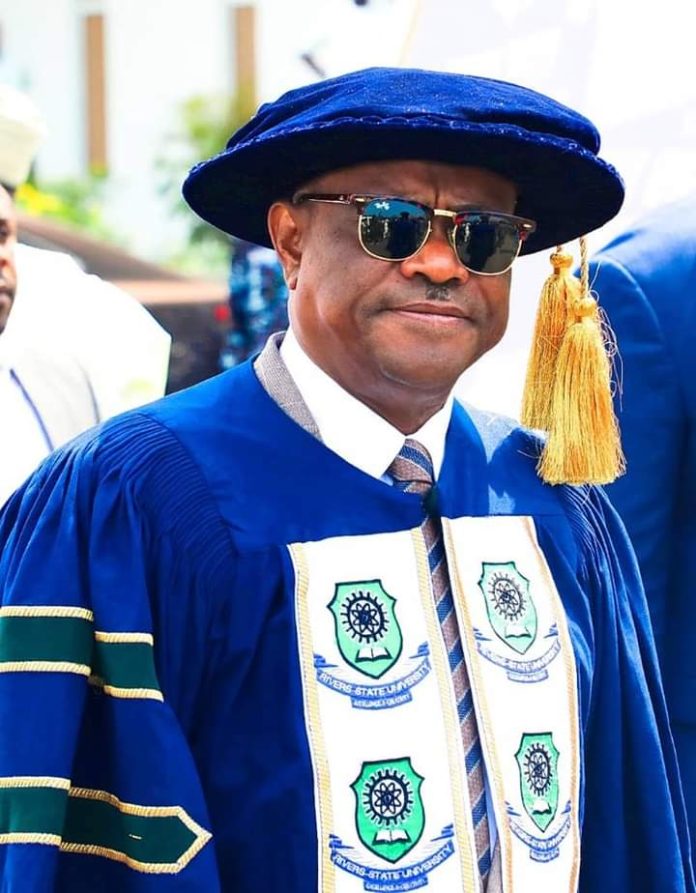 Governor Wike gave the charge at the 34th Convocation ceremony of the Rivers State University (RSU) on Saturday in Port Harcourt at which he was conferred with the Honourary Doctor of Laws Degree LL.D (Honoris Causa).

The governor stated that it is for the attainment of that global standards that his administration delightfully invested funds generously to improve infrastructure, established faculties particularly the college of medical sciences.

Governor Wike said at the inception of his administration, he constituted the Governing Council of the institution and charged them to develop the blueprint that will engender sustainable transformation in the university.

After that, governor Wike explained that his administration also resolved the lingering strike of the academic staff and recalled the staff unjustly dismissed for union activities by the previous government.

That action, he noted, restored industrial harmony to the institution, achieved within his first two weeks in office.

“Third, we immediately started tackling the university’s infrastructural challenges one after the other.

“We completed, furnished and commissioned the long-abandoned faculty of law complex within our first 100 days in office.”

Also started and completed, he said was the Senate Building in his third year in office, and the College of Medical Sciences buildings in his fourth year in office

“We then transformed the former Braithwaite Memorial Hospital into the Rivers State University Teaching Hospital with the state-of-the-art equipment.”

Governor Wike remarked that today, the relatively new College of Medical Sciences of the University is reckoned to be on its way to becoming one of the country’s best medical schools as declared by the Medical and Dental Council of Nigeria.

The governor recalled the review of the enabling law of the institution so that it will reflect the multi-disciplinary structure and implemented an enhanced salary structure for the university staff.

Governor Wike said his administration also restored the multi-campus structure of the university that was cancelled by the military. The campuses, he said are now located in Ahoada, (East) Emohua, Etche, Sapkenwa; (Tai) Local Government Areas, fully equipped with faculty and administrative buildings, staff quarters and will commence academic activities soon.

“A few weeks ago, we authorised the management to engage 1355 new academic and non-academic staff to resolve the staff shortfalls occasioned by retirements, resignations, and the establishment of new academic departments and centres.”

Governor Wike said as the Visitor to the institution, he is satisfied with what have been accomplished with his administration’s investments over the last seven and half years.

“No doubt, the billions we have invested have significantly advanced this university in infrastructure, growth and prestige and empowered it with the capacity to produce the kind of graduates that we need to serve our State and country with character, commitment and responsibility.”

With all these investment, governor Wike insisted that the university management must move the institution away from the existing academic model of processing of graduates in their numbers after every four or five years, unmindful of the quality of knowledge and skills imparted.

The governor maintained that RSU cannot be rated high and respected globally unless it can link education with cutting-edge research that creates new knowledge and innovation that converts ideas into wealth creation, jobs and human progress.

“Graduates lacking adequate knowledge, dexterity and self-transformation cannot be helpful to society, nor will they be useful to themselves.

“Money spent on such graduates may have also been wasted as they will remain socio-economic burdens to their families, friends and community.”

While congratulating the graduands and urging them to put their knowledge to practical use, governor Wike announced the donation of N1B (One Billion Naira) to RSU to enable the management cater to the needs of the multi-campuses.

Governor Wike commended the management of the university for conferring the Doctor of Laws (LL.D) Honoris Causa on him for his services to the university, the State and the nation.

“I am grateful to receive this honour from this university. It means so much to me, and I will cherish it for the rest of my life.”

In his address, Chancellor of the University, (Rtd) Justice Sidi Bage Muhammad 1, regretted the declining value system in the country that has also affected the quality of education in the country.

A few evidence of such decline Justice Bage, who is also Emir of Lafia Bare-Bari , noted are poor national orientation, a lack of an enduring welfare system and general lack of attention to the youths.

These, he observed, have given greater impetus to the JAPA syndrome, which is the unquenchable desire among Nigerians to relocate abroad, phenomenon that has become a major national threat and indicator of a blink future for Nigeria.

Prof. Okogbule explained that governor Wike was honoured with the Honorary Doctor of Law Degree LL.D (Honoris Causa) because of the numerous levels of support his administration gave to the university.

The Pro-Chancellor and Chairman of the Governing Council of RSU, Justice Iche Ndu , who was also conferred with Honorary Doctor of Law Degree LL.D (Honoris Causa), noted that since 1989 until date, he could not recall any administration in the State that has supported like governor Wike.

Ten Hag: ‘We’ll do everything to replace Ronaldo’

Political Power too Weighty to Learn on the Job – Ikpeazu