Home Uncategorized B’ Haram, Fulani herdsmen kill over 3,000 under Buhari
Spread the post 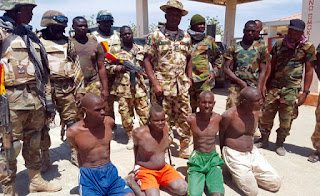 No fewer than 3,094 Nigerians have been killed by suspected Boko Haram insurgents and Fulani herdsmen since President Muhammadu Buhari assumed office on May 29, 2015, Saturday PUNCH investigations have revealed.

It was also learnt that thousands of persons, including women and children, sustained various degrees of injuries from the attacks.

Available figures indicated that the number of persons killed by the suspected insurgents dramatically dropped after President Buhari’s four months in office.

In the last days of May 2015, following President Buhari’s inaugural speech, the deadly sect reportedly killed 97 persons and injured several others.

In 2015, Nigeria ranked third in the 2015 Global Terrorism Index, trailing Iraq and Afghanistan.

According to the index, on June 4, 2015, a female suicide bomber in Maiduguri killed two people near a military checkpoint. On the same day, 45 people were also killed in a Yola market, Adamawa State when a blast ripped through the place.

One of the worst Boko Haram attacks in the last one year include an attack on Dalori village, some four kilometres from Maiduguri, Borno State on January 30, 2015, where at least 86 people were reportedly killed after an invasion by the insurgents.

On February 9, 2016, 60 people were reportedly killed while 78 others were wounded when two female suicide bombers suspected to be Boko Haram members, sneaked into a camp for internally displaced persons in Dikwa, Borno State.

However, the situation did not apply to the casualty figures associated with Fulani herdsmen attacks.

In February 2016, suspected Fulani herdsmen attacked a village in Agatu, Benue State, reportedly killing at least 300 persons. The attack has been described as one of the worst ever witnessed in the series of attacks by Fulani herdsmen.

No fewer than 10 houses including a church were also said to have been burnt in the attack.

In the same month, suspected Fulani herdsmen also attacked Dori and Mesuma villages in Gashaka Local Government Area of Taraba State, killing at least 15 people, according to the police. Although, residents said more than 40 persons were killed and several houses razed by the assailants.

One of the most recent attacks by suspected Fulani herdsmen occurred on Friday, May 20, 2016, when two persons were killed and six others injured following an attack on Oke Ako in Ikole Local Government Area of Ekiti State.

It was alleged that the assailants had attacked their victims for refusing to allow the herdsmen use their farmland for grazing their cattle.