Home Uncategorized Federal Government To Take Over The Trial Of Paul Emeka for forging...
Spread the post 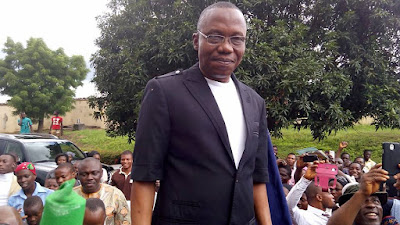 The Trial of the Suspended,Dismissed,and Dis-fellowshipped Former General Superintendent of Assemblies Of God Nigeria Rev Dr Paul Emeka will now be handled by the office of the Attorney General of the Federation .

Paul Emeka had in August 2005 presented a Fake Professorial Certificate purportedly belonging to University of Derby in England stressing that he was awarded a Prof of Theology by the said University.

After he was Disciplined in 2014 for violating Several sections of the Constitution of Assemblies Of God Nigeria,Paul Emeka launched full Fight against the Church,masterminding arrest,beating and burning of Cars Belonging to respected greatmen of God.

His actions now paved away for a look into some of the Documents he presented to the Church,and behold the said Professorial Certificate from the University of Derby was Fake and Forged

The General Council of Assemblies Of God Nigeria petitioned the Inspector General of Police about it,the Police Investigated and found out that truely it was a Forged Certificate,instead of taken Paul Emeka to court,the Police refused producing the outcome of its Investigation due to the manipulation of the President of the Christian Association of Nigeria Pastor Ayo Orisetjafor.

The Incorporated Trustees of Assemblies Of God Nigeria made a Direct Complaint to the Upper Area Court in Abuja,the Court wrote to the Police to produce the outcome of the Investigation,and even ordered as Well,but the Inspector General Of Police Mr Solomon Arase refused obeying the said Order

By the notification of the Attorney General,the trial of Paul Emeka will now be taken over by the Federal Government because certificate forgery is a crime against the Nigeria State

Here is the SOFT COPY OF THE LETTER

Please Refer To the Subject Matter Above

We are solicitors to The Assemblies of God Nigeria

We reported a case of Forgery against one Paul Emeka to the Force Headquarters of the Nigeria Police.

As the Police was Investigating the matter, we also investigated same and we found out that the purporting professorial Certificate submitted to the Assemblies of God Nigeria By the Said Paul Emeka who claimed to be a Professor was False.

Upon Instituting the said matter, the Court wrote to the Police to produce the Investigative report to the Court. The Nigeria Police did not accede to to that request. Attached herewith and marked AG2 is the said Letter dated 4th November 2015 and duly acknowledged at the Inspector General’s Office on the 6th November 2015.

When the matter came up in the Upper Area Court on the 4th February 2016, the Court ordered the Nigeria Police to Produce both the Investigation report and the suspect to the Court.

Sir the attitude of the Inspector General of Police and the Nigeria Police in this matter is given a Bad image to the Present Government – Creating an Impression of impunity by the Executive against the Judiciary :which we are sure is not the intent of the present Government.

Sir, as the Chief Law Officer of the Federation, use your good offices to Instruct and compel the Inspector General of Police to obey the Court Order of the Upper Area Court, Wuse sitting in Gudu

We trust in your ability to resolve the issues raised herein amicably.

Accept the assurance of our best Regards

80% of My Advisers are useless, Jonathan Confesses